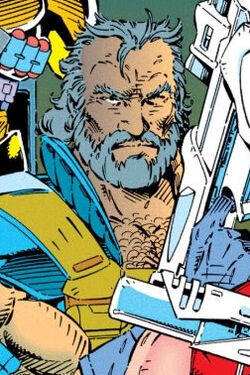 In the late 37th-early 39th century, Apocalypse had ruled much of North America unchallenged for 100 years. Following the destruction of Apocalypse, a young Tetherblood attended secret Askani revivals ministered by Fossil, where he met Nathan Dayspring. After Fossil wrongly stated that Mother Askani defeated Apocalypse, Nathan spoke-out and he and Tetherblood were captured, by 'Strator Umbridge. After 'Strator Umbridge realized that Nathan was the Askani'son and the one who defeated Apocalypse, she sent guards and Blaquesmith seemingly sacrificed himself for Tetherblood and Nathan to escape, telepathically telling Nathan to find the remaining members of the Clan Askani.[1]

Following the destruction of the Askani Sisterhood, by the New Canaanites led by Ch'vayre and Stryfe, Nathan, Tetherblood, and Aliya founded the Clan Chosen, an Askani-inspired team of freedom fighters.[2]

Training in the Askani ways under surviving Askani elders, the Clan Chosen repeatedly battled the New Canaanites and the Scions of the High Lord, led by Stryfe. Tetherblood and Nathan forged a very close relationship over the following years. When Stryfe's spy, Korless, infiltrated the Clan and Stryfe psychically attacked Nathan, Stryfe captured Tetherblood and the Professor from Nathan's camp and Stryfe tortured Tetherblood to find out its importance.[3]

During another battle, Tetherblood and Nathan lead a squad to obtain Captain America's Shield, which Nathan used to inspire liberty and justice in his followers. After Nathan returned to his original timeline to become Cable, Tetherblood took over leadership of the Clan.[4][5]

After Cable and Kane were injured in battle with Stryfe, Cable took Kane to Applecrust in the future, where Kane stayed with the Clan Chosen while waiting for Cable to return. Cable returned to Kane in Applecrust and aided the Clan Chosen in battling a group of Flatliners. The Clan Chosen decided to send Kane home and destroy the Tinex, the time-travel nexus, within Niagara Falls.[6]

Like this? Let us know!
Retrieved from "https://marvel.fandom.com/wiki/Tetherblood_(Earth-4935)?oldid=5190756"
Community content is available under CC-BY-SA unless otherwise noted.