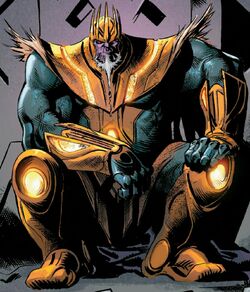 So. You have returned. Your quest across time to kill me... to kill death... has failed. I admire your efforts. I do. But try as you might. You see now that none may escape the inevitability of my purpose... now, and always... Thanos wins.

This Thanos' life seemingly mirrors that of his younger self.[2]

As time went by, the heroes of Earth grew old and weak, but Thanos only grew stronger;[2] his eternal quest to please Death leading him to kill almost every living thing in the known galaxy,[4] and become the king of what had remained in his wake: nothing.[2]

Knowing that he had to die in order to be with Death,[6] King Thanos gave a piece of the Time Stone to his servant, the Rider, and tasked him with going back in time to drag his younger self to the future[3] so he could be killed by him[6] after dealing with the Fallen One, the one being who had eluded him.[4] The time-displaced Thanos soon started a fight with his older self for thinking he was a pretender, but ceased his attacks once King Thanos confirmed his identity by speaking the name his mother was going to give him before going insane: Dione.[2]

When the Fallen One arrived at King Thanos' palace with the Annihilation Wave at his back,[4] King Thanos fought alongside his younger self and the Rider against them,[5] and managed to viciously claim the Fallen One's life, prompting Death to return.[7] Once his younger self realized the true reason for having been taken to the future was to kill King Thanos so he could be by Death's side, the elder Thanos prepared for battle since he didn't want to go out without a fight. Despite overpowering his future self, the younger Thanos stopped attacking after the elder Thanos begged for his death. Having become disgusted by his future self's begging, young Thanos stepped back and snatched the Time Stone shard from his necklace in order to return to his time, and set out to never become like his future self. Because of this, the elder Thanos and his entire timeline started fading to nothingness. In his final moments, King Thanos confronted Death to know what did his younger self do to rid of him. After King Thanos and all of reality was gone, Death simply replied that what he did was to win.[6]

Later, after his timeline was somehow restored, King Thanos greeted the Universal Church of Truth as they returned from their quest across time to build an army of Drax clones to kill him, in which they failed thanks to the interference of the Guardians of the Galaxy.[8]

Seemingly those of his younger self, but stronger.

Seemingly those of his younger self.

Like this? Let us know!
Retrieved from "https://marvel.fandom.com/wiki/Thanos_(Earth-TRN666)?oldid=5787735"
Community content is available under CC-BY-SA unless otherwise noted.