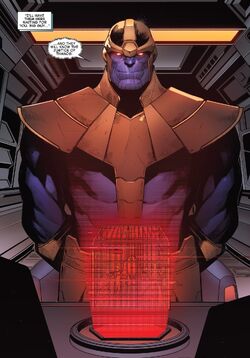 Thanos the Just ruled the moon of Titan with his seat of power at the Gauntlet, from which his Peace Force watched over and protected the galaxy's innocents. After Thanos had brokered a peace between the Skrulls and the Kree he sought to end the violence throughout the universe. To that end he sought the Reality Stone, recently displaced into his universe from another one. Though reluctant to deal with lowlifes, he hired Lord Starkill to recover and deliver the Stone to him under strict condition that Starkill not contact him or show up on Titan personally, as Thanos could not be seen associating with him.[1] Starkill succeeded in the task, but counteroffered by suggesting he also bring the Zeta Flight, the crew of his nemesis Corporal Carol Danvers, to face justice on Titan.[2]

By the time Starkill arrived on Titan, both crews had mutinied and planned to deliver their captains to Thanos instead. Thanos greeted them as they landed and stopped Nebula, captain of his Peace Force, from fighting her sister Gamora who was on Starkill's crew. Thanos invited his guests to the Seat of Galactic Justice and wondered as to why two criminals incapable of redemption would turn themselves in. When one of Starkill's associates revealed to be having the Reality Stone, Thanos ordered all pirates seized and announced his intention to use the Stone to rid of the galaxy of all criminals and pirates once and for all. However, the pirates fought back and Gamora attacked Thanos, which greatly angered her sister. Having recovered the Reality Stone, the criminals made a run for it, but Thanos ordered Nebula not to pursue, confident that justice would find them regardless.[1]

Thanos is a patient and benevolent ruler, known for his composed posture and stoic demeanor. He has a great deal of respect for the rule of law and is an experienced negotiator and peacekeeper. Though disappointed with his daughter Gamora's choice to throw in with space pirates, Thanos never lost hope for her, believing that she would one day come back home when ready. He treats his visitors with respect and even when pushed to outbursts of anger is quick to insist that fighting hate with more hate is not the right way.[1]

Like this? Let us know!
Retrieved from "https://marvel.fandom.com/wiki/Thanos_(Earth-TRN837)?oldid=5804103"
Community content is available under CC-BY-SA unless otherwise noted.