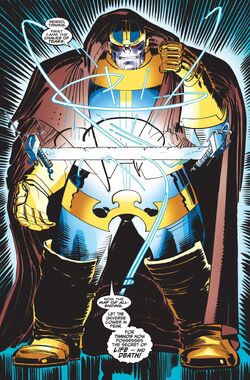 This higher-powered Thanosi model was set against Thor.[1]

Appearing in Asgard as it laid in ruins with many of its warriors defeated by the powerful Mangog, the Thanosi found an ally in Odin's aide, Tarakis, who helped him to obtain the apocalyptic Map of All-Ending from the All-Father. Already possessing the Chalice of Ruins, the Thanosi believed the two objects would help him to find the being known as the Designate. The Thanosi and Tarakis collected their other ally, Mangog, who had just defeated Thor, and traveled to the planet Rigel-3, home of a peace-loving race of thinkers and dreamers. Once there, the Thanosi teleported Mangog to the surface, and the hulking behemoth began to destroy everything in sight. The Thanosi demanded the Fire Jewel, the next item required to find the Designate in order to stop Mangog's rampage. He was ultimately successful, although Rigel was nearly laid to waste in the process.[2]

Thor promptly traced the Thanosi's route, and allied himself with the Rigellians, Recorder 211 and Firelord, the former Herald of Galactus. Thr Thanosi and Mangog managed to collect the final items and captured the Designate, a woman named Tarene. As Thor and his allies battled the Thanosi and his allies, Tarene began to weep for her champion, Thor, an action that granted Thanos the power of Ragnarok. Before the Thanosi could truly begin Ragnarok, Thor killed Mangog and was given enchanted pieces of armor to supply him with the Odin-Force. Thor and his allies battled the Thanosi once again. As the Thanosi fell, Tarene wept again for the lives of all those slain by him. As written, she flung her tears upon the fallen Titan, who burst into an all-consuming hellfire which vanquished him forever.[3]

Like this? Let us know!
Retrieved from "https://marvel.fandom.com/wiki/Thanos_(Higher-Powered_Thanosi)_(Earth-616)?oldid=5481991"
Community content is available under CC-BY-SA unless otherwise noted.