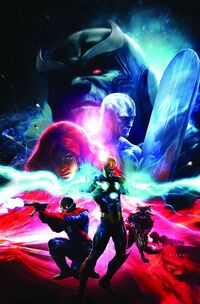 Near the conclusion of the Shi'ar-Kree War, the Inhumans's T-Bomb exploded in the void between the Kree and Shi'ar galaxies.[1] Tearing a rift in the space-time continuum, which exposed the universe to other realities.[2] To prevent it from expanding the Guardians of the Galaxy stabilized the Fault.[3] The Shi'ar Imperial Guard sent an expedition into the Fault, where they were forced to do battle with demonic-like forces, took casualties, and were forced to withdraw.[4]

As the Guardians of the Galaxy were watching the imprisoned Thanos, who had recently been resurrected, Nova pursued the fake Quasar.[5][1] Meanwhile the Fault which had been sealed by Adam Warlock, was torn open by Magus and his Universal Church of Truth.[1][6][7]

Eldritch monsters and a fleet of warships emerged from the Fault, which were confronted by a Kree-Shi'ar armada commanded by Queen Medusa. They soon discovered that these monsters could take up to 7-8 times the damage before dying compared to their reality's equivalents. Allied starships were being hit by ejecta that were alive and breaking through their hulls. The fleet was being overwhelmed by the invaders, forcing Medusa to send out a call for reinforcements from everyone in known space. Reinforcements arrived and the fleet came to include starships from a hundred interstellar cultures, including the Rigellians, Spartax, and Blastaar's forces. It was an invasion that made the Annihilation War look like a schoolyard fight. Among the invaders was their leader, Lord Mar-Vell who killed Magus for his failure to locate Thanos. Soon afterwards, the allied armada were reinforced by various cosmic beings, including Galactus and the Celestials. In response the invaders sent the miles-long Galactus Engine to deal with the cosmic abstracts. During the fighting it was discovered that the eldritch entities were able to kill cosmic abstracts. The cosmic beings were forced to retreat as the Galactus Engine was tearing through everything in its path.[8]

The invaders came from the Cancerverse, a universe in which a dying Captain Mar-Vel made a pact with the Many-Angled Ones, primordial Eldritch entities that exist between the universes, spreading their corruption across the Multiverse. He corrupted and twisted his closest friends and allies, after which they destroyed that reality's Death by killing its avatar of death, Thanos. Permitting the Many-Angled Ones to take over his reality, corrupting all life. It became a universe in which nothing died and life ran rampant, similar to cancer. He now aimed to spread this plague of "undeath" to the rest of the multiverse.[9] Lord Mar-Vel was the Cancerverse's avatar of Life, and just as he had killed his reality's avatar of death, he needed to do the same to this universe's Thanos to kill it's Death. The Guardians of the Galaxy took Thanos into the Fault to eliminate Lord Mar-Vell, while Mar-Vell was searching for Thanos in their universe. Nova led the Silver Surfer, Quasar, Gladiator, Beta Ray Bill, and Ronan the Accuser against Mar-Vell only to be defeated. Drax the Destroyer who was influenced by the Cancerverse, attacked Thanos, forcing him to kill Drax. Which alerted Mar-Vell to his presence in the Cancerverse.[10]

Mar-Vell confronts the Guardians and Thanos back in the Cancerverse, and to the Guardians shock Thanos surrenders to Mar-Vell, seeking a final and permanent death.[11] Upon sacrificing Thanos, Mar-Vell realized that he had been tricked as Thanos's death summoned Death from the Prime Reality into the Cancerverse. Mar-Vell is claimed by Death, resulting in a chain reaction. His followers were killed, the Fault collapsed, the Cancerverse was collapsing, and his masters were weakened. Thanos expected to be embraced by Death but once again she spurned him, enraging Thanos who blamed the heroes and vowed to all of the comos would suffer. Nova and Star-Lord teleported the rest of the Guardians back to Earth-616, while they remained in the Cancerverse to keep Thanos within that dimension until its approaching destruction.[12]

During a memorial service which was held for the casualties of the war, Rocket Raccoon was informed by Quasar that without Nova, the Nova Force had disappeared and the Worldmind had shut down.[12] The Kree Empire which had not yet recovered from the war, was violently assaulted by Blastaar's force, as he expected to easily conquer the Kree. The former members of Nova's strike force came to the aid of the Kree, forcing Blastaar's forces to withdraw. Together with Ronan, the cosmic heroes established a base in Knowhere and formed a loose-knit team. Which took the name of "Annihilators" who would act as a "last resort" team.[13] Star-Lord and Nova whom were thought lost, were alive and back in their home univeerse. It was discovered that due to Death returning to Earth-616, the Cancerverse was not destroyed and had recovered.[14]