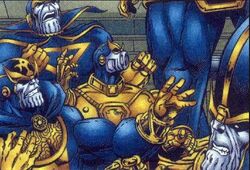 Modified clones created by Thanos to determine the strength of possible foes or the reliability of possible allies. He used cloning, sorcery, and technology for these Thanosi.[1]

After tests involving Ka-Zar,[2] Thor,[3][4] and the Avengers[5] proved the clones a failure due to them exhibiting nihilistic and destructive behaviors, Thanos scheduled them for recycling; however, a secret player blasted a hole in the roof of one of his hideouts' subterranean section, and consequently activated five of the replicants:[1] Armour, Mystic, Omega, Warrior, and X.[6]

X impersonated Thanos using a telepathic illusion and directed Pip the Troll to kidnap Adam Warlock as he was recovering from insanity on an alien planet.

X required information from Warlock, who previously made contact with Atlez. Gamora located the real Thanos, and with the aid of Warlock, Doctor Strange, Spider-Man, Captain Marvel, and Moondragon, killed four of the the Thanosi.

However, the final clone, Omega, had gone to Earth to kill Atlez's successor Atleza and destroy the Earth. Omega was prevented from doing so after being teleported with the heroes to a barren planet where they battled. Thanos transported the heroes back to Earth and had a fleet of alien mercenaries destroy the planet, killing Omega. This allowed Atleza to take Atlez's place as the Anchor of Reality and thus sparing the universe from destruction.[7]

Like this? Let us know!
Retrieved from "https://marvel.fandom.com/wiki/Thanosi_(Earth-616)?oldid=6076183"
Community content is available under CC-BY-SA unless otherwise noted.