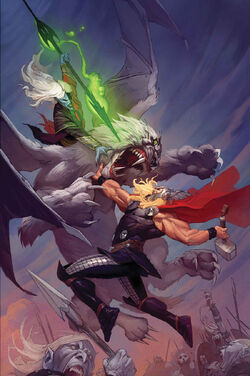 At some point in the past, Malekith the Accursed had a Dark Elf slip a spell into Thor's mead in Asgard, bugging him and allowing Malekith to follow his moves.[2]

Malekith was succeeded by Queen Alflyse to lead Svartalfheim.[3]

At some point, Malekith was sentenced to eternity by Odin due to his repeated attempts to terrorize the Nine Worlds, and was imprisoned into the Hall of Nastrond, in Hel within the realm of Niffleheim.[1]

After acquiring a potion able to hide from Hela and her Valkyries, and killing the wizard who had brewed it, a group of Dark Elves loyal to Malekith went to Niffleheim and Hel, and infiltrated Nastrond Prison. Scumtongue and the other warriors battled the giant spiders guards while their comrades looked for their king. As they were discovered by all of the spiders, Sourfoot found the pit where Malekith was kept and offered his body as a ladder for him to flee.[1]

Once out, Malekith decided to eat the hearts of all of the spiders. At the end of the fight, only Scumtongue was left standing. The duo then retreated to Svartalfheim.[1]

There, and with more loyalists to Malekith, they soon attacked a village, slaughtering every man, woman and children[1] of the Dove Gut Tribe,[4] as a way to return its strength to his people, gone weak under the rule of Alflyse.[1]

While feasting at Asgardia for Volstagg's election as senator of the Congress of Worlds, a Dark Elf was suddenly affected by visions of the massacre, Thor, Sif and the Warriors Three rushed to Svartalfheim, only to witness the slaughter.[1]

Malekith revealed himself, with last villager Waziria as hostage. At that point, Volstagg, as senator at the Congress, advised to tread carefully given the delicate context, constating that this conflict was Svartalfheim Civil War.[1]

Threatened, Malekith diverted the Asgardians by cutting off Waziria's arm and disappeared along with his troop, unleashing the Wild Hunt upon his own people wherever they would be in the Nine Realms.[1]

While Malekith slaughtered at least one more village, Alflyse came to the Skornheim Mountains of Nidavellir, escorted by Lord Swarmsuckle, to be protected by the Dwarf King. In exchange, she promised mining right to Svartalfheim's eastern spires.[5]

Meanwhile, Sir Wormsong, the greatest swordsman in Svartalfheim was sent to challenge Malekith at his camp at the Bloodmuch Swamp. Malekith accepted the challenge (refusing being a shameful act) but, bested, managed to defeat Wormsong using magic.[5]

The League of Realms

While the Congress of Worlds agreed to act, they refused to let an Asgardian force track Malekith, and convened that a composite group would be assembled: The League of Realms. The group was composed of Sir Ivory Honeyshot of the Light Elves of Alfheim, Screwbeard of the Dynamite Dwarves of Nidavellir, Oggmunder Dragglevadd Vinnsuvius XVII/"Oggy" of the Longstomp Tribe from the Hills of Jotunheim, emmisary of the Mountain Giants, and Ud the Troll,[5] official ambassador for the Kingdom of the Trolls.[4] All sworn a sacred oath to bring peace to Realms.[5]

As Thor had assembled a pack of Asgardians (including Sif, Fandral and Hogun), he was stopped by Volstagg and Freyja and his troop was dismissed and the League was presented to him.[5]

Lady Waziria joined the group, in order to avenge her tribe, at all the members' defiance and disapproval.[5]

The League was sent to Nidavellir as Alflyse had informed the Congress of her position and requested protection.[5] Thanks to the bug inside Thor, Malekith knew where to strike, always aware of Thor's doings.[2]

Arriving to the Skornheim Mountains, the team found Malekith, Scumtongue and their men slaughtering Dark Elves and Dwarves alike. The mission was a fiasco as Alflyse and her men were all beheaded and Malekith's troops managed to escape. The League was confronted to its first dissensions, whom Thor quickly put an end to, reminding his teammates of their oath.[5]

The Queen dead, the shade of civil war, ruin and chaos grew darker over Svartalfheim,[5] enforcing the division of the population in little groups scattered in the Realms and consumed by tribal rivalries and feuds.[6]

The Council of the Unhallowed, the Dark Elf tribal council, went into hiding in Midgard, and were asked by Thor at some point to debate his proposal of uniting behind an unique leader.[4]

The League eventually managed to catch back Malekith's riders in Alfheim, causing severe losses among their ranks and save the Dark Elves refugees, while Malekith escaped once more. Despite this success, the League remained fragile, leading Thor to try to unite them at a tavern, closely followed by Malekith.[6]

Three days later, the League arrived at Jotunheim, where a group of Dark Elves hided somewhere in the Brown Alps among the Mountain Giants, and timely stopped the beginning attack of the Wild Hunt Riders. Oggy was killed in the battle by Malekith, but as the Accursed retreated in Frost Giant territory, where Scumtongue blew a horn to call them,[6] the League was unable to avenge him, as such action would have been seen as an act of war.[4]

After laughing to Thor's threat, Malekith and the Giants retreated, leaving the League to bury Oggy.[4]

They then went to Vanaheim, finding yet another group of Dark Elves slaughtered, but this time from an intestine fight. There, the League suspected a traitor among their ranks, informing Malekith from within.[4] Suspecting Waziria (like all the League),[4] Thor faked to execute Ud,[2] causing the League to disband, save for the Dark Elf who stood with the Asgardian.[4]

Final Battle on Midgard and Settlements on Asgardia

The pair then went to New York City, met with Sir Canker, official herald of the Council of the Unhallowed, and entered their secret hiding. Discovering the debate and its protocols (councilmen stabbing and insulting each other), Thor interrupted and asked for open election to find a ruler to unite the clan, but was ignored by the Council. Malekith soon arrived, and a brawl started between Thor and Waziria, enraged to be accused of being the League's traitor. She unleashed her powers, revealing Thor's bug.[4]

The League, including Ud, returned as planned, and a fight broke, with the councilmen targeted directly by Malekith. As Thor defeated him and the councilmen surrounded him, the Council decided to make of Malekith their King.[2]

Back on Asgardia, that decision was settled, at many's rage and disgust. As Malekith was still sentenced to return to Nastrond, he invoked his royal right to call a proxy, and Waziria volunteered to take his place, in order to ensure Svartalfheim's peace.[2]

Finally, Scumtongue was made senator at the Congress of Worlds.[2]

Ivory Honeyshot comforted Thor, recalling him that they had together built the first step of brotherhood and peace between the Realms.[2]

Later, Malekith went to Muspelheim along with a Frost Giant, intending to form a League of Realms of their own.[2]

Retrieved from "https://marvel.fandom.com/wiki/The_Accursed_(Story_Arc)?oldid=5569291"
Community content is available under CC-BY-SA unless otherwise noted.