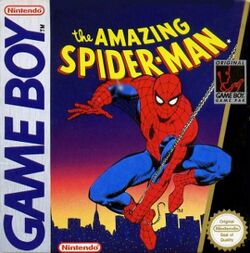 Spider-Man's most dangerous super villains have discovered his secret identity, Peter Parker, and kidnapped his wife, Mary Jane. The action game takes the player through various city locations, battling an assortment of minor thugs, animals, and a supervillain at the end of each level who, through intermission scenes, will taunt Spider-Man as to the whereabouts of his wife.

Like this? Let us know!
Retrieved from "https://marvel.fandom.com/wiki/The_Amazing_Spider-Man_(1990_video_game)?oldid=6452063"
Community content is available under CC-BY-SA unless otherwise noted.