MPAA: PG-13 for sequences of action and violence

This life is not an easy one... I've made enemies. Powerful enemies. Put those I love in danger. But the one thing that has haunted me, my entire life, is find the truth about my parents.

Young Peter Parker was left with his aunt and uncle, Ben and May, when his parents, Richard and Mary were forced to leave. Peter grew up with the mystery of his parents' disappearance, becoming an outcast in high school. Flash Thompson bullied Peter, who caught the eye of fellow classmate and crush, Gwen Stacy.

Peter finds his father's briefcase in his house's basement, which reveals to him the plane crash that killed his parents, and that his father had worked for OsCorp with Dr. Curt Connors in cross-species genetics. He goes to OsCorp searching for Connors and makes his way in by pretending to be a member of the high-school interns. Gwen, who is the guide of the group and assistant to Connors, recognizes Peter very quickly. She allows Peter to stay, so long as he stays out of trouble. Trying to find out more about his father's work, Peter sneaks into a lab where genetically altered spiders are being held. One manages to stay on his neck when he left and bit him. Peter takes a train home and falls asleep. Here, Peter's abilities begin to show, as he accidentally rips a woman's shirt off with his sticky hands, and takes out a group of enraged civilians, again by accident.

Frightened by his new abilities, he attempts to research spider bite symptoms but is unable to find the spider that bit him, as it was a genetic mutation. He decides to visit Dr. Connors at his home and reveals to him that he is Richard's son. After a short discussion, Peter gives Connors the equation to complete a limb regeneration formula, which he had learned from studying his father's notes.

The next day, Peter humiliates Flash in the school gym but gets in trouble when he accidentally breaks the backboard of the basketball hoop. Uncle Ben meets with the school principal and mentions that he had to switch his work shift in order to be there, and asks Peter to pick up Aunt May from that night. When Ben leaves, Peter asks Gwen out, and to his surprise, she says yes. Out of excitement, Peter goes to an abandoned shed after school and uses his new-found powers to swing from chains hanging from the ceiling. Later that night, Peter meets with Dr. Connors at OsCorp, helping to complete the regeneration formula, ignoring a call from Uncle Ben. When Peter returns home, he is scolded by Ben, who is enraged that he forgot to pick up May. Peter storms off and Ben leaves to search for him. Peter attempts to buy a small bottle of milk at a convenience store but is two cents short. The cashier refuses to let him pay two cents less, stating it is not his policy. The store is robbed soon after, and when asked to help stop the thief, Peter sarcastically replies it is not his policy. He hears a gunshot, and when he goes to investigate, he finds that Uncle Ben has been shot.

Peter is given a police sketch of the suspect, who he recognizes as the thief he let go at the store. He is also informed that the suspect had a star tattoo on his left wrist. Enraged, he begins a hunt for the thief, attacking anyone who looks similar to the sketch. He eventually dons a mask to hide his identity from the crooks he attacks. During this time, he develops a web-like fluid and the "Web-Shooters" to fire it. His actions catch the attention of the Police Captain George Stacy, who is also Gwen's father. He then creates a full suit for himself, which would become his Spider-Man costume.

When Peter accepts Gwen's invitation for dinner, he meets her family and discusses with her father that the "Spider-Man" was a hero, not a vigilante. This annoys George, who insists he was nothing more than a punk in a mask. After a short argument, he and Gwen leave to "get some fresh air" on the rooftop. Here, he reveals to Gwen that he is Spider-Man, and they kiss, but he soon leaves in response to a police report on the bridge. There, Peter faces a large, reptilian creature, known as the Lizard. He knocks the Lizard down, but is unable to fight him, as he rescues a small child from a burning car. It was here that Peter takes the Spider-Man name himself, and the public becomes widely aware of him.

The next day, Peter goes to meet with Dr. Connors at OsCorp and very quickly realizes that Connors has mutated himself into the Lizard. He attempts to warn Captain Stacy about it, but he does not believe him. Peter later decides to track the Lizard into the sewers, and also get pictures of him for a cash reward at the Daily Bugle. He is attacked by the Lizard and severely wounded, and barely escapes. Peter leaves his camera in the sewer, which the Lizard finds and realizes Peter is Spider-Man. The Lizard later attacks the school in an attempt to kill Peter and prevent him from further interrupting his plans, but when the fight continues for too long, the police arrive, and he is forced to retreat.

Peter calls Gwen, asking her to develop an antidote at OsCorp, then follows the Lizard and finds his lab. After finding video files in the makeshift lab, Peter discovers the Lizard is planning to use a device capable of creating a cloud carrying a serum large enough to cover an entire city to transform New York into lizard creatures like himself. He very quickly realizes the device is located at OsCorp and attempts to call Gwen to warn her and get her to leave. Gwen refuses and evacuates the building. Peter then rushes to OsCorp, in an attempt to save both Gwen and all of New York city.

On his way, Peter is attacked by the NYPD. He is shot with an electrified dart, which briefly knocks him unconscious. Captain Stacy unmasks him, but Peter is woken by his spider-sense and knocks Stacy down before he can see who he is. After webbing the eyes of the officers, he is forced to reveal to Captain Stacy who he really is. Stacy realizes that Peter is truly trying to protect the city, and allows him to go. However, on his way, an officer shoots him in the leg. A weakened Spider-Man is then assisted by crane operators, as one of them was the father of the child he saved on the bridge. The operators move their cranes in a way that creates a straight shot to OsCorp.

At OsCorp, Spider-Man arrives to fight the Lizard but is restrained by his tail. Captain Stacy arrives and helps Spider-Man by shooting the Lizard, stunning him. Peter uses liquid nitrogen to freeze the Lizard, making him more vulnerable. He manages to get to the chemical device and switch the reptilian serum with the antidote that Gwen had made. The Lizard eventually murders Captain Stacy and attempts to stop Peter, but fails, and the antidote cloud reverts the Lizard back into Curt Connors.

As Captain Stacy is dying, Peter is forced to promise him not to see Gwen anymore, to keep her out of harm's way. Peter attends Captain Stacy's funeral and ignores Gwen the following days per her father's request. Peter eventually tells Gwen it was over, but she very quickly realizes her father was the reason for this. The following day at school, Peter is told by a teacher not to make promises he cannot keep in response to his tardiness. Peter whispers to Gwen, "but those are the best kind", revealing he would get back together with her. He swings through the city again that night, in response to a police report. 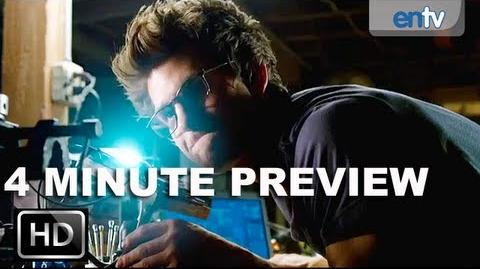