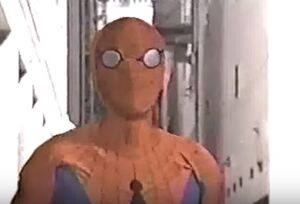 Spider-Man is making his way along rooftops as a crowd begins to gather below. A woman is preparing to throw herself off of a ledge several stories up, and Captain Barbera is leaning out of a window near the ledge, trying to get her to come away from the edge. Spider-Man begins climbing down the side of the building, and he lands on the ledge in front of the woman, blocking her from the edge. He pushes her back against the wall, and together, they move to the window. Spider-Man hands the woman over to Captain Barbera, and climbs back up to the roof, as the crowd cheers below. Later, after changing out of is costume, Peter Parker enters the Daily Bugle, and is greeted by the new receptionist, Rita Conway. He goes into J. Jonah Jameson's office, and asks that he be assigned to actual stories, instead of just being sent to get pictures of Spider-Man all the time. Later, he attends a class at college in which his teacher, Dr. Bailor, is giving a lecture on plutonium. He informs the class that there will be plutonium in the school lab for a certain period of time where it will be used for experiments, but several of the students, including Peter, protest. Dr. Bailor dismisses the class, and leaves, and Peter talks to several of his classmates, Craig, Sid, and Carla Wilson, before leaving.

In Gstaad, Switzerland, businessman Mr. White is taking a bath when he receives a phone call from someone informing him of the plutonium in New York. He goes to do his workout, and tells his henchmen, Angel, Ramon, and an unnamed martial arts expert to get the plutonium. Later, journalist Gale Hoffman is assigned by her paper to get an interview with Spider-Man, and she is sent to the Daily Bugle to meet Peter Parker, the person who has gotten the closest to Spider-Man. She goes to the Bugle, and Jameson introduces her to Peter, and tells him that she'll shadow Peter so that when he runs into Spider-Man, she'll be there to interview him. Later that night, Peter and Gale discuss the plutonium at the university, but Gale switches the subject to Spider-Man, asking Peter questions about him. Peter answers a few, but before long, his spider-sense goes off, and he leaves saying he has to go to a class, but that he'll be back. Meanwhile, Craig, Carla, and Sid break into the lab to steal the plutonium. Peter changes into Spider-Man, and climbs to the roof, but he is seen by two security guards, who try to catch him. He climbs over the edge and down the side of the building, out of reach of the guards, and goes through the window into the lab. However, by this time, the thieves have made off with the plutonium. Several guards enter the room, and Spider-Man leaves through the window, but he is seen by the guards. Later, as Peter Parker, he comes into the lab, and by this time, Captain Barbera, Dr. Bailor, and several policemen have made the scene. They inform Peter that the plutonium was successful, and that they saw Spider-Man leaving. Gale comes in, and shows Barbera her credentials, and they fill her in. The next day, Captain Barbera is paid a visit at the police stain by Inspector DeCarlo, from Switzerland, who informs him of the potential terrorist threat that the plutonium has. At their apartment, Craig, Sid, and Carla begin experimenting with the plutonium, and they start to build a bomb with it. Craig tells them not to forget why they stole it in the first place; to show Dr. Bailor how easy it could be done, so that he wouldn't treat the presence of plutonium in the university so lightly.

Elsewhere, Peter and Gale sit in his apartment, and Gale asks Peter about Spider-Man. He tells her how he really feels about his powers without revealing his dual identity, saying that 'Spider-Man' probably never wanted these powers, and that they've ruined any chance he has at a normal life. He tells her that Spider-Man probably never planned don or wanted to be a super-hero, but his conscience wouldn't let him use his powers for anything other than to help people. They're interrupted by a phone call, and Peter answers it. It's from 'John Ashton Smith', a famous TV anchorman, but in reality it's Mr. White. He asks them to meet him, and they go to the address that he selected. They knock on the apartment door, but White steps out with a gun, and the martial artist grabs Gale. They tel Peter to give them the location of the plutonium, and he realizes that they think that he has it. When he tells them that they've made a mistake, Angel throws a punch at him, and he dodges. Angel's massive fist crashes through the wall, and Peter pushes him into the others, freeing Gale. They begin running through the complex, pursued by White's men. They lock themselves in another room, and climb onto the ledge outside, just as Angel smashes his fps through the door and unlocks it. They look out the window and see Peter and Gale who have made it to the fire escape, and give up. They grab a taxi, and Gale tells Peter hat he can stay at her place for the night, since they won't look for him there. Meanwhile, Captain Barbera and DeCarlo conclude that Peter must have stolen the plutonium. After not finding him at his apartment, they go to Gale's place, and find him there. Peter says that he spent the night there, and when he receives a questioning look from Babera, tells the cop that he spent the night on the couch. They tell Peter that they think the took the plutonium, and hey take him to the station.

After clearing his name at the station, Peter goes to the Daily Bugle, and is fired by Jameson. Back at the apartment, Craig, Sid, and Carla put the finishing touches on the bomb. Carla, having radiation burns and poisoning, collapses, and they take her to the hospital. Peter hears about this, and he and Gale go to the hospital. Peter meets Craig and Sid there, and they confess that they stole the plutonium and made a bomb, but that they only did it to prove how easy it was, and that thy were going to give it back. Angel, who is posing as a bystander inside of a telephone booth in the hallway, overhears the conversation. They tell Peter where the plutonium is, and he leaves, but Gale starts tagging along. Realizing that this is a job for Spider-Man, Peter ditches Gale and heads into the men's restroom, but he can't change because a hospital employee is combing his hair Peter goes into a stall and changes into his costume, and the man leaves. Having waited long enough, Gale goes into the men's restroom, but just misses Peter, who jumps out of the window as Spider-Man. Spidey heads to the apartment to get the plutonium, but once there, he finds that Mr. White had the same idea. He plants a spider-tracer on White's limousine, and then gets onto the roof and takes out Ramon, but the martial artist hears the commotion and goes up the fire escape to check it out. He sees Spider-Man, and the two begin to fight. Spidey easily dodges several of his attacks, but he keeps coming. He chases Spider-Man all over the roof, and he draws a weapon, a metal rod. After a lengthy fight, the web-head finally manages to disarm and beat him. Angel attacks from behind and puts Spider-Man in a bearhug, and finally throws him off of the roof. Spidey fires a web line and creates a hammock out of webbing in between the building and the neighboring one, and he lands in it. He then jumps down to the street, but finds that his device to track his spider-tracers had fallen out of his belt and broken on the pavement.

The story is continued next episode...

Retrieved from "https://marvel.fandom.com/wiki/The_Amazing_Spider-Man_(TV_series)_Season_1_1?oldid=5993592"
Community content is available under CC-BY-SA unless otherwise noted.