"Night of the Clones" 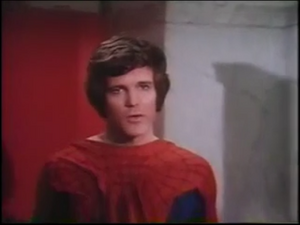 Episode Title
"Night of the Clones"

Appearing in "Night of the Clones"

Synopsis for "Night of the Clones"

Inside the Daily Bugle, J.Jonah Jameson has a conference with all the other reporters, including Peter Parker have a conference involving the recent awards that are being given to certain scientists, and that the ceremony is being hosted in New York. Different reporters are assigned to different scientists, and Peter is assigned to Doctor Moon. Peter goes to an unveiling of one of Moon's west experiments at his university. He, along with several other journalists, watch as Moon takes a blood sample from his guinea pig, a frog, and bombards the blood with radiation. He puts it into a special chamber, and slowly, it begins to grow, and soon, it is a full-grown clone of the frog. Peter gets a chance to talk to Moon, and tells the doctor that he attended one of his classes at the university. Later, a man inside the scientists' hotel rigs the elevator, and it's reveals to be Dr. moon, who is willing to kill his competitors in order to obtain the award. Lisa Benson and her father go back to their hotel, but they take the elevator, and they're almost killed. Peter comes a while later to take pictures, but Captain Barbera runs him off, saying that no pictures are allowed. Peter briefly interviews Lisa, but his spider-sense goes off, and his sense alerts him the how the elevator was rigged. He leaves to change into Spider-Man, but is seen in costume by the police, so he leaves. Meanwhile, Dr. Moon goes home to his hotel room, and speaks with the person who has been orchestrating their plot to get Moon to win the award, Dr. Moon's own clone. Realizing that the clone is an evil version of him willing to kill to achieve his goals, Moon attempts to give him anesthetic, but the clone turns the needle on Moon and knocks him out with it.

Later, the clone of Moon has begun impersonating Moon at the hotel. Peter goes to see him, but his spider-sense goes off when he meets the clone. He goes up to Lisa's room, and warns her that Dr. Moon may be dangerous. Lisa gets a call from the receptionist saying that Dr. Moon wishes to speak with her and gave her an address, and she leaves, despite Peter's protests. Peter changes into Spider-Man and follows Lisa, and he watches from the window outside as she meets with Moon. Moon suddenly pulls a gun, and Spidey crashes through the window, cutting his hand on glass in the process. He knocks the gun from moon's hand, and kicks the man down. Together, the wounded Spider-Man and Lisa run away and lock themselves in a vault downstairs. Moon finds a small puddle of Spider-Man's blood from his cut hand, and he takes it and leaves, just as Spidey breaks out of the vault, freeing himself and Lisa. Later, Peter goes to the Bugle, and Lisa gives her testimony, misconstruing it and saying that Spider-Man attacked her. Peter meets with Jameson, who says that he wants Peter to cover a costume ball at the hotel where the scientists are, and Peter reluctantly agrees, since he'll need a costume. meanwhile, at his hotel room, Moon's clone gets back with the blood sample, while the real Dr. Moon sleeps soundly due to the anesthetic. He puts the blood through the cloning process, and he puts it in the chamber. hearing a knock at the door, he opens it and finds Peter, who asks Moon if it's possible to clone a man. It's silently understood that both parties know that the other is hiding something, and Moon closes the door, as Peter leaves. He returns and finishes the process, and the blood sample grows into a fully-grown clone of Peter Parker, revealing that Peter Parker is Spider-Man, since he used a blood sample from Spidey. Later, Peter's evil clone, and Dr. moon's clone get Peter's clone some clothes, and they leave to go to Peter's apartment to get his Spider-Man costume for the clone to wear. After they leave, the real Peter Parker, in his Spider-Man costume, climbs up the building and enters Moon's room through the window, where he finds the real Moon unconscious. The two clones go to Peter's apartment and retrieve the spare Spider-Man costume, but find that the belt is missing, since Peter only owns one belt for the costume. Meanwhile, Peter goes to Aunt May's House, and meets Aunt May who gets an old Eroll Flynn costume out for Peter. He tries it on at home after the clones have gone, but the pants rip. Wondering where he'll find a good costume for tonight, he suddenly realizes that he has the perfect costume, his real Spider-Man outfit.

That night, at the party, Peter comes in as Spider-Man, and sees two other partygoers sporting Spidey costumes, though one is fatter than the others. After briefly talking to Rita Conway at the party, he goes into the bathroom to get his belt and camera ready. The Peter Parker clone comes in behind him, and points a gun at him. He tells Peter to put his mask on, and the two go up to the roof in full costume. They meet the Moon clone, but the real Peter makes a daring escape, knocking the gun from his clone's hand and running across the roof. The clone puts on his mask and gives chase, and the two Spider-Men begin to fight. After a brief altercation, one of the Spider-Men spins a web, and attaches it to a pole. He swings on it, but the weight of him snaps the pole, and he crashes into some electrical equipment on the roof, which explodes, killing him. The other Spider-Man jumps down next to Moon, and reveals himself to be the real one. The Dr. Moon clone begins shaking, and he falls over. He explains that the acceleration process has begun, and he begins aging very rapidly. Finally, he grows too old and dies. spider-Man leaves, and the police arrive. Inside the party continues, and an angry Captain Barbera approaches one of the partygoers dressed as Spider-Man, mistaking him for the real Spidey. He begins berating him for putting the police through the hassle of cleaning up moon's body, and he asks what happened on the roof. He rips Spidey's mask off, and finds that it's J. Jonah Jameson in the costume, who is very displeased by Barbera's behavior. Peter, in his costume, drives downstairs and takes Jameson's picture in the costume, an he and Rita laugh about it.

Retrieved from "https://marvel.fandom.com/wiki/The_Amazing_Spider-Man_(TV_series)_Season_1_4?oldid=5228873"
Community content is available under CC-BY-SA unless otherwise noted.