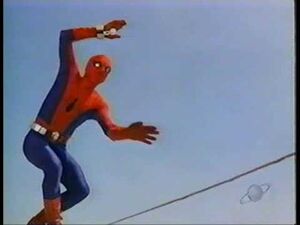 It's called striking back, Peter.

Appearing in "The Captive Tower"

Synopsis for "The Captive Tower"

Peter Parker and Rita Conway stand outside of the newest, hi-tech building in New York, since Peter is there to get photos of the opening for the Daily Bugle. Julie Masters, a photographer of a rival newspaper, arrives, and Peter waves to her. Rita leaves in Peter's car, and Peter goes inside the building with Julie to take pictures. Inside the building, the Deputy Mayor tells the press how the building works, and that it's run by a new computer system that is self-sustaining. Meanwhile, a group of men in maintenance uniforms break in, and make their way to the building's computer room. J. Jonah Jameson is a guest at the opening party, and the mayor invites him to stand. Peter and Julie take pictures of the whole event, but they're constantly competing, covering the other's lens or elbowing their competitor so that their picture is blurry. In the computer room, the leader of the men convinces one of his henchmen to climb up to the roof and set explosives there, so that no police helicopters can land there. The man climbs up, and knocks out an actual maintenance man, and ties him up. They set the explosives, and descend from the roof in a gondola. The tied-up maintenance man finds a discarded tool belt on the floor, and pulls a screwdriver out of it. He shimmies up to the control panel, and messes with it using the screwdriver, causing the gondola system to malfunction. The gondola stops outside the window of the floor that the press are on, and Peter and the others see the men stuck on the gondola outside. Amid the confusion, Peter leaves and changes into Spider-Man.

Spidey climbs up the side of the building outside, and saves the two men on the gondola. The leader and another henchman find the panel and fix it, and they threaten the prisoner. The gondola lowers back down to the window of the computer room, and the two men step off into the room. Mr. Farman, one of the men, hacks the computer and begins closing off all the exits by making the computer think there is a fire. Peter, Julie, JJJ, and a staff member try to go to the commuter room, but find that they're locked inside the floor that they're on. The staff explain to the press that the computer has probably just malfunctioned, but they quickly learn that this isn't the case. The leader gets on the building's loudspeaker, and tells everyone that he is Major E.W. Forrester, and that his group of highly trained soldiers have overtaken the building. He says that if the city does not turn over $10,000,000 to him and his team, then he will start killing hostages. Peter discusses a way to get to the computer room with the staff, but with no luck. Meanwhile, Forrester calls the police, who are down below by the building's entrance. Lieutenant Ramirez contacts Forrester over the phone, and he agrees to give he Major the money. However, he sends in a helicopter to land on the roof, unaware of the explosives placed there. Peter changes into Spider-Man, and begins making his way to the roof, using his spider-strength to move the doors blocking the exits.

Spider-Man finally gets to the roof, just as the police helicopter is landing. He webs onto the landing gear of the chopper, and pulls them awards him until they're facing him. He tells them not to land, and signals them to the bombs. They move away from the roof, and Spidey tightrope walks along a web, so as not to set off the heat pressure trigger on the bomb. Hanging from his web, he deactivates the bomb, and the chopper safely lands. The team gets out of the copter, and Spidey fills them in. The head of the team, Sergeant Bolter, tells him the situation that the police are in, and he calls Ramirez on his radio. Spidey speaks to Ramirez, but the lieutenant says that it's too dangerous for Spider-Man to try and get into the computer room through the window. Spider-Man leaves the police on the roof, and clubs down the side of the building. He gets in and begins running through the stairwells, just as Forrester begins pumping sleeping gas through the air vents. The gas takes effect, and the press begin to sleep. Spidey begins to feel the effects, and he begins to feel drowsy. He runs out and climbs to the top of the roof, but begins swaying on the edge. The crowd below see him, and he slumps over on the roof. he quickly recovers though, and climbs down the side of the building. Finding the window that connects to the floor that the hostages are on, he swings on a web and crashes through the window. After changing back into his normal clothes, Peter wakes Julie and the others, and he then walks to the computer room. Meanwhile, Forrester's men receive the money through the gondola, and they take the elevator to the basement. They walk through the tunnels, but Farman, who is angry that Forrester made him destroy the computer before leaving, goes back up to the computer room to try and save it. Peter sees Farman, and sneaks up on him. He surprises Farman, but convinces him to tell him where Forrester is in exchange for Forrester's punishment over the loss of the computer.

After changing back into his costume, Peter goes into the basement, and follows Forrester and his remaining three men. One of them hurts his leg, but is able to go on. He slows down, and Spidey webs him up. The others go on, but they hear the man scream, and Forrester tells his last man, Hammond to go back and check it out. Hammond draws his gun, and goes back, while Forrester waits with the money. Spidey ambush and continues down the tunnel. Spidey ambushes him, and the two fight. Spidey beats Hammond, and continues down the tunnel. Forrester gets greedy, and leaves, but Spidey finds him and webs him up.

Retrieved from "https://marvel.fandom.com/wiki/The_Amazing_Spider-Man_(TV_series)_Season_2_1?oldid=4644443"
Community content is available under CC-BY-SA unless otherwise noted.