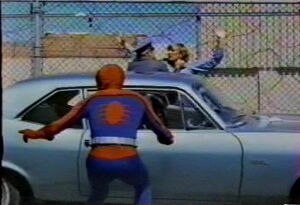 Sometimes, the medicine leaves a bad taste, but it gets the job done.

Appearing in "The Con Caper"

Synopsis for "The Con Caper"

Jim Colbert is released from prison, and he is surrounded by a mob of reports, and after answering several questions, he leaves, but he's accosted again by reporter Julie Masters. He answers several more questions, and leaves her to go to his limousine. Rita Conway is inside the limo, and she greets him. They both get into the car and begin talking, and the driver takes them into the city. They go to the Daily bugle, where he meets Peter Parker and J. Jonah Jameson. He begs Jameson to go to bat for him when he talks to the Board of Corrections, since Jameson is a pillar of the community. Colbert says that he knows what it's like inside the prison, and that he thinks they could stand some changes. He agrees to let Peter cover the story, and the two leave. Rita goes into Jameson's office, and she begs him to put in a good word for Colbert, since Colbert gave her her first job a while back, and when she needed a friend, he was there. Jameson agrees, and she happily hanks him and leave his office. The Bugle gets a report about a prison rot, and Jameson sends Peter to accompany Colbert there. They leave and meet the warden, who gets Colbert on the phone with the riot ringleaders, Kates and McTeeg. Meanwhile, another prisoner decides that he's going to try to escape, but Kates and McTeeg tell him that, even though they currently control the prison, it's to early to escape. He grabs one of the guards they were keeping as prisoners, and takes him out of the prison at gunpoint. Meanwhile, Colbert negotiates with Kates over the phone, and he finally gets Kates to agree to a meet-up in the prison, but on the condition that he come alone, and that Peter can't come to cover the story. Peter's spider-sense goes off, and he hastily leaves, and changes into his costume. As Spider-Man, Peter makes his way along rooftops, and sees the prisoner get into a car with the captive guard, and leave through the prison gate by pointing his gun at the gate guard. He finally gets to the prison, and webs a nearby lookout tower, and swings off of the roof, Landing on the car's roof he follows the car out through the gate, and he webs the hood and pulls it open. Unable to see anything, they stop the car, and Spidey webs the gun out of the man's hand when he steps out of the vehicle. More guards drive up and arrest the man, and they secure the prisoner guard, and Spider-Man leaves.

Later, Colbert goes to the prison and meets with Kates and McTeeg, and once they are alone, they greet each other as old friends, which they are. They begin discussing their plan; Colbert has been conning everyone so that he and the other two can escape prison and rob a bank. Colbert tells them that Peter Parker is beginning to become a problem, and they should deal with him. Later, Colbert remarks that Rita has a beautiful voice, and that they should set up an afternoon of entertainment for the prisoners, and she'll sing for them. She agrees, and they plan to have Peter pick her up. Later, someone puts a bomb in an envelope on Peter's for, and they attach it to the doorknob. Peter calls Colbert, who tells him to pick up Rita, and as he's on his way out, his spider-sense warns him of the impending danger. He divs out of the way, comments before the door explodes. Arriving at the prison, Peter is stopped from getting in by the guard, who says that Colbert only arranged for himself and Rita to go in. Confused, Peter walks away. Rita prepares to start the show, but Kates and McTeeg set up the sound equipment, and McTeeg messes with some of the stuff. They put an explosive in one of the speakers on one of the prison windows, and the bomb begins ticking away. Rita begins to play her guitar and sing, and the prisoners actually seem to enjoy it. Suddenly, the bomb detonates inside the speaker, and it blows up on the window, stating a small fire inside the room that the window leads into. Peter appears on the scene as Spider-Man and climbs up into the building. He jumps through the window and saves an elderly inmate trapped in the fire, lowering him down to the guards and paramedics blow on a web. After completing his objective, Spidey climbs back over the prison wall, as everyone cheers him on. As everyone focuses on the explosion, Kates and McTeeg use the distraction to climb the prison wall and escape.

Later, Peter goes into the Bugle building and tells Rita that Colbert set them up, and that Colbert made an attempt on his life. Rita, having trouble believing this leaves to go talk to Colbert, and Peter sips a spider-tracer in her purse. Meanwhile, Kates and McTeeg practice for their bank heist, and Kates practices a motorcycle jump that is essential to the plan. They return to Colbert's house and tell him that he bike-jump may not work, as Kates only made one successful practice jump in the last 13 months. Rita arrives a the house and meets with Colbert telling him that people have been saying some bad things about him, and she asks if they're right. Colbert confirms her suspicions and tells her his plan to get ore money from the supposedly uncrackable vault in a bank in new York than a lifetime as a politician, which hasn't done much for him so far. she tries to leave, but he stops her, and has McTeeg tie her up in the garage. McTeeg messes with a saw in the garage and leaves, and Rita immediately begins working against her bonds. Meanwhile, Peter leave the Bugle building, but Julie Masters runs into him, and begins following him, saying that she won't let him beat her to another story. Peter ditches her and drives off in his car, tracking his spider-tracer, and Julie follows him in a cab. Peter finally finds the house, and Julie catches up to him, and gets out of the cab. Unable to shake her, Peter allows her to follow him, and they sneak around the side of Colbert's house. Peter opens the grace window, and they sneak in and untie Rita. Julie tries to turn on a light, but she accidentally hits the switch for the saw, turning it on and alerting cColbert, who comes in with a gun. After tying up all three of them, Colbert, McTeeg, and Kates leave to ob the bank. Peter cuts the rope binding his hands with the blade of the saw, and he unties the girls. They let him go after the thieves, and Julie leaves with Rita.

Meanwhile, the thieves dress as repairmen, and go up to the roof of the bank. They get their motorcycle on the roof, and Kates jumps it off of the ramp they set up. He makes it to the other roof, and then he attaches a cable to a pole on his roof, and Colbert and McTeeg use the cable and cross the rooftops. Peter runs into the bank and tries to warn one of the tellers, but the man blows him off, saying that they're vault is impenetrable. Peter leaves and changes into Spider-Man, and scales the building easily. After citing the vault, Colbert and McTeeg make it across back along the cable, but before Kates can, Spider-Man appears. Kate's tries to run him down with the motorcycle, but he dodges,and Kates crashes into the wall on the roof. After webbing him up, Spidey gingerly climbs onto the cable and begins to tightrope walk it but Mcteeg removes it from the pole on their of, and Spider-Man fans off of it, and into the ally blow. He saves himself by making a webbing hammock in between the two walls, and then he jumps down to street level. After getting back down to the ground floor, Colbert and McTeeg open the back doors to their van to load their loot inside, but Spider-Man is inside, and he webs them both up in a net. Later, after contacting the police, he leaves, and changes back into his normal clothes. As Julie watches the cops arrest the men, a saddened Rita watches Colbert get taken away. Peter tries to console her, but she says that she's fine, and it that it needed to be done.

Retrieved from "https://marvel.fandom.com/wiki/The_Amazing_Spider-Man_(TV_series)_Season_2_3?oldid=5228889"
Community content is available under CC-BY-SA unless otherwise noted.