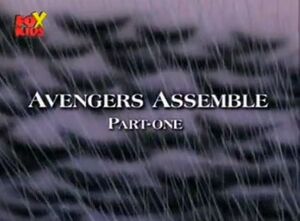 Ultron creates the Vision, an android deemed perfect and virtually immortal. He then tells Vision that their only obstacle in the way of destroying all of humanity is Ant-Man, Dr. Henry Pym. The U.S. President will present the Avengers with a special commendation in Central Park, and Wasp assures Henry that he's just as qualified to lead as the other Avengers before him. Wonder Man attacks the Scarlet Witch to practice her hex powers and Hawkeye spars with Tigra until Ant-Man tells the Avengers to assemble. The President's chopper is shot out of the sky and Ant-Man leads the team to Central Park in the Quinjet.

Sam Wilson aka The Falcon enters his apartment and sees the aerial robots shooting at the President's chopper, causing collateral damage to the neighborhood, so he summons his trusted falcon - Redwing. Tigra, Hawkeye, Scarlet Witch and Wonder Man jump out of the Quinjet and start destroying robots but Tigra is badly hurt, saved only by the intervention of Falcon. The Vision fires his heat vision at the helicopter and brings it down, commanding Ultron's army to fire upon the Quinjet while Ant-Man orders Hawkeye to protect the President.

The Quinjet lands and Vision attacks the plane with heat vision. Hawkeye fires an explosive arrow but Vision remains unscathed, becoming intangible when Wonder Man also attacks him. With Hawkeye out of the way, the President is unprotected from the army but is saved by the Falcon, and Hawkeye blows up the armed vehicles. The police arrive and Ultron commands Vision to return to base. Hawkeye brings Ant-Man a downed robot to study, but Ant-Man notes that because Hawkeye left his post to fight Vision, the President was hurt and could've been killed.

A Government agent, Mr. Sikorsky tells the Avengers that the President wants Hawkeye out of the team, and the Falcon in, despite protests from the entire team. Ant-Man reluctantly decides that Hawkeye should lay low for a while, so he storms out and Wonder Man follows to calm him down. Later on Jarvis takes the downed robot to Henry's lab, and since the group must find him, Tigra decides to go after Falcon. Ant-Man examines the downed robot but in spite of the security scans placed, a self destruct sequence is activated. While Ant-Man stays behind to disarm it, the rest of the Avengers head to Central Park to stop Ultron's robots, but the robots stop fighting. They realize they left Ant-Man vulnerable and the Avengers Mansion alarm goes off.

Ant-Man fends off robots while Vision fires a heat beam at him but Wonder Man takes the hit, ending with the downed robot's self-destruct countdown hitting zero.

This debut episode has the same title as the series finale of The Avengers: Earth's Mightiest Heroes.

Like this? Let us know!
Retrieved from "https://marvel.fandom.com/wiki/The_Avengers:_United_They_Stand_Season_1_1?oldid=6499112"
Community content is available under CC-BY-SA unless otherwise noted.