Traveler in time and space

Type 40 TARDIS, Stockbridge, Gallifrey, mobile across the known universe and beyond and all of time

The Doctor came from the planet Gallifrey, in the constellation of Kasterborous, home of the Time Lords.[3][4][5] Details of his early life are unknown, but he attended the Time Lord Academy, where his best friend was the man who was destined to become his greatest nemesis, the Master. The Doctor eventually stole an obsolete type 40 TARDIS and fled Gallifrey in it, apparently accompanied by his granddaughter (who took the name Susan Foreman on Earth) in order to experience the universe for himself.[6] Over the years he traveled the universe with numerous companions including his granddaughter Susan, K9, Sarah Jane Smith, Sharon Davies,[7] and Ace, meeting allies like the shadow man Shayde, Death's Head, Kroton, Ivan Asimovf, the Freefall Warriors, Max Edison and Abslom Daak, Dalek Killer, and battling powerful monsters and villains such as the Daleks,[8] Cybermen, the Master, Beep the Meep,[9] the Time Witch,[10] the Malevilus,[11] the demon Melanicus, and countless others.[12] Although he was eventually captured by the Time Lords and exiled to Earth in the 20th Century for a time,[13] where he found employment with the paramilitary organization UNIT, he was later given his freedom by the Time Lords after assisting them against their insane former hero, Omega.[14] The Doctor continues to explore and defend the universe across time and space.

The Doctor has extensive knowledge and experience in the fields of science, history, medicine, technology, and many others.[15] He knows how to hypnotize normal humans, is a skilled swordsman and marksman, and has limited telepathic abilities.

Near-immortality: As a Time Lord, the Doctor has a radically slowed ageing process and can potentially live for hundreds or even thousands of years before needing to regenerate into a new body. In the most current accounts, the Doctor is more than 900 years old. Despite this, he (usually) has the appearance and physical ability of a man in his prime.[16][17][18] The Doctor can live indefinitely in one form [citation needed] but has noted he will not always be immune to the effects of ageing, such as senility, if he does so.[12]

Regeneration: The Doctor's most famous power is his ability to regenerate into a new body upon sustaining a mortal injury[19][17][20][18] or reaching advanced age.[21] While the physical appearance and personality is changed completely, his memories remain mostly (but not completely) intact.[22] This allows the Doctor to live almost indefinitely. The standard number of regenerations a Time Lord can use is twelve although that can be changed.[23][12] The early stages of Regeneration also allows Time Lords to regrow severed limbs.[24] Regeneration also allows Time Lords to use powerful energy as a concussive force capable of incapacitating, or even destroying,[12] multiple foes. 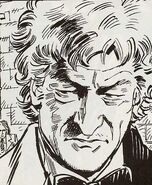 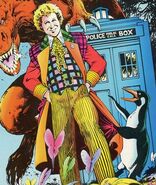 Accelerated Healing Factor: The Doctor often shows impressive healing abilities. While not on par with someone like Wolverine, Time Lords can heal from broken bones in a few days,[citation needed] non-lethal bullet wounds in a day,[citation needed] survive falls from great heights,[22] and even regrow one of their hearts in a few months. [citation needed] As noted, a Time Lord soon after regeneration is able to regrow severed limbs [24] or even survive otherwise-lethal gunshot wounds.[25] Time Lords often slip into comas to recover from extreme damage that made them appear dead. [citation needed]

Telepathy: The Doctor possesses limited telepathic abilities and is a skilled hypnotist. This is a trait shared by all Time Lords and which allows them to communicate and rapidly share information and the Doctor is also able to confer this ability to humans temporarily as well as share information quickly.[26]

Time Lord Physiology: The Doctor's enhanced physiology allows him to survive on less oxygen than a human requires, to the point of possessing a 'respiratory bypass', have an increased resistance to poisons and toxins, and possess radically enhanced senses compared to humans. He can even briefly endure the hard vacuum of space due to the above mentioned respiratory bypass system.[3]

Enhanced Senses: Time Lords possess all of the senses of a human being to a heightened level. Their eyes can see in the dark better than humans and see objects hundred of yards away with nearly perfect clarity,[citation needed] they can also hear across large distances,[citation needed]

Super-Genius Level Intellect: Time Lords are among the smartest species in the Universe[citation needed] and the Doctor shows extensive knowledge of many areas, such as human and alien sciences, technology, history, medicine, mechanics, and engineering, etc. to the point of literally beyond comprehension of what humans and many other aliens are capable of.[citation needed] The Doctor is also an excellent tactician and has taken down many powerful enemies using his cunning.[citation needed]

The Doctor once claimed Aspirin could kill him.[34] Various events have triggered the Doctor's regenerations – radiation,[19] falling from great heights,[17] old age,[21] and botched exploratory heart surgery.[35] It can be assumed that when the Doctor reaches his final life, any of these examples and others would be able to kill him for good. Regeneration is an unpredictable process that could fail, and often can be upsetting physiologically.

Sonic screwdriver. This innocent-looking device is the Doctor's favorite tool. The Doctor can reprogram it to manipulate sound and matter in nearly infinite combinations. Early versions were mainly used for opening doors and undoing screws.

Few to none. The Doctor prefers using brain instead of brawn, but he has only been witnessed wielding guns on exceedingly rare occasions, sometimes using them as lethal force,[39][40][41][42][37] sometimes not.[18]. If he needs to use a gun, he will commandeer it, such as in The Forgotten, where his sixth incarnation used it to demonstrate the gun's capability to fire intangible bullets that pass through obstacles on its way to its target. However, as mentioned above, he is an expert swordsman.

The Master: The Doctor's arch enemy, a rival Time Lord and a master hypnotist.[18] His super-genius level intellect combined with his charisma and his insanity makes him one of the universe's greatest threats. [43]

Josiah W. Dogbolter: Dogbolter is half-man, half-frog, and the president of Intra-Venus, Inc. in the 82nd century. [44] A ruthless businessman, Dogbolter has on multiple occasions tried to capture the Doctor and his TARDIS, including hiring Frobisher [33] and Death's Head.[45]

The Doctor rarely travels alone, preferring to share his adventures with the company of others. In his long life, he has travelled with many humans, fellow Time Lords, robots and other aliens. These include, but are not limited to, the following:

Type 40[18] TARDIS. Short for Time And Relative Dimension In Space,[36][18], though "Dimensions" is sometimes used, [citation needed] TARDIS refers to several models of space-time vessels, capable of travelling to any place or time (although the term "TARDIS" has also been identified a nickname Susan came up with specifically for the Doctor's space-time ship).[36] The interior is an extradimensional space that can be much larger than the exterior, usually with cabins, recreational areas, and a control room.[36] It often has a chameleon circuit, which allows the user to change its outward appearance to blend in with the scenery (in keeping with the Time Lords' non-intervention policy).[36] The Doctor's TARDIS, for instance, took on the appearance of a London police call box when he visited Earth in the 1960s, but when the chameleon circuit malfunctioned, it remained in that shape permanently, only ever changing slightly or temporarily.[36][37][18] The TARDIS is an "alive", sentient, machine-like lifeform capable of expressing emotion. [38][19][18] It holds stated affection for the Doctor. The source of its power is the 'Heart of the TARDIS', connected to the Time Vortex.