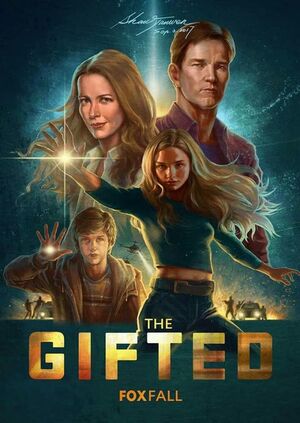 In Atlanta, Mutant Underground operatives Eclipse, Polaris, and Thunderbird help Blink escape from the local police. The police arrest Polaris, but the rest of the mutants escape to the Underground's headquarters. Hours later, Atlanta ADA Reed Strucker and his wife Caitlin meet with the principal of their childrens' high school to discuss their son Andy's bully problem. After the meeting, Reed is called to Garland Detention Facility in Texas so he can begin to build his case against Polaris. Reed threatens her with enhanced sentencing due to the use of her mutant abilities when she attacked the police unless she helps the government track down other members of the Mutant Underground.

Lauren and Andy Strucker go to the school dance that night. After Lauren leaves her brother to meet up with her boyfriend, Andy comes across the group of bullies that have been terrorizing him. They drag Andy to the locker room where they begin to haze him with the shower. Suddenly, the walls around them start to buckle, and soon the whole school begins to collapse. Lauren hurries to find her brother, revealing herself as a mutant when she generates force fields to protect herself and others from falling debris. She finds Andy in the locker room and realizes he and his latent mutant powers are the source of what's devastating the school.

Lauren and Andy return home and reveal to their mother that they are both mutants. Before they can decide what to do next, two agents from the Sentinel Services knock on their door to take Andy and Lauren away for the safety of the community. The Strucker children use their powers to help all three of them get away from the Sentinel Services. Caitlin calls her husband from a gas station to let him know their children are both mutants.

Reed meets up with the rest of his family in Atlanta outskirts. With the Sentinel Services after them, Reed realizes they have to flee the country for Mexico where the anti-mutant laws are more lax. He uses Polaris' phone to contact the Mutant Underground and offer to help Polaris' situation if they help his family get to safety across the border. Reed also reveals that she's pregnant. They evade the Sentinel Service's drones so Reed could meet with Eclipse at a diner. After Reed answers Eclipse's questions about his and Polaris' baby, Eclipse tells him that the rest of his family will leave that night, but Reed will have to stay behind with the Underground until Polaris is free. Meanwhile, Thunderbird and Polaris leave the Underground's headquarters to find Eclipse after he left alone without telling anyone what he was up to.

Retrieved from "https://marvel.fandom.com/wiki/The_Gifted_(TV_series)_Season_1_1?oldid=5182102"
Community content is available under CC-BY-SA unless otherwise noted.