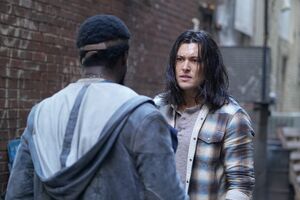 With the Morlocks out of her way, Reeva is ready to launch her Mutant Revolution, first by using the sewers to attack the Sentinel Service's D.C. headquarters. Lorna realizes she will have to get away from the Inner Circle soon, but she first has to try and convince Andy - who is starting to have doubts about his commitment to the Inner Circle - to leave with her. Reed and Marcos find Johnny still distraught over Clarice's death. Reed checks to see if the area is safe, but finds the Purifiers nearby. Officer Wilson already had Turner go back to his hotel room, as he was guilt-stricken for attacking a community and not the terrorist training camp Ryan told him was down there. Wilson confronts Reed in an alley when Reed's mutant powers suddenly activate. Reed grabs and destroys Wilson's gun before grabbing his neck to kill him.

Caitlin and Lauren are pinned down in an abandoned building, surrounded by the cops. Johnny's grief over losing Clarice prevents him from tracking them, but Reed and Marcos hear about the action at the abandoned building over a police scanner. Lauren's mutant powers suddenly reawaken, allowing the Strucker women to hold off the police until Marcos and Reed arrive to help. Reed again taps into his mutant abilities to create a hole in the building's wall, while Marcos absorbs the light to hide them from the police. On their way back to the apartment building, Lorna calls Reed so he can talk to his son. Andy thinks he can't leave the Inner Circle because he's become a monster who wants to kill anyone who stands in his way. Reed tells Andy about how he killed Wilson because he wanted to. Turner, meanwhile, finds out about Wilson's death when he confronts Ryan over his misleading information about the Morlocks.

Lorna returns to the Underground with Andy. After tearful reunions between Andy and his family and Lorna and Marcos, they all head to the roof to find Johnny still struggling to cope with losing Clarice. After learning of Lorna and Andy's betrayal, Reeva bemoans the loss of having two legendary mutant families play a role in founding the mutant homeland. Now, they'll have to kill them.

Retrieved from "https://marvel.fandom.com/wiki/The_Gifted_(TV_series)_Season_2_15?oldid=5123403"
Community content is available under CC-BY-SA unless otherwise noted.