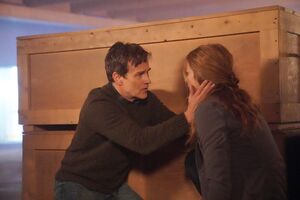 After discovering Lauren and Andy have returned to the Underground, Reeva has Benedict Ryan order his Purifiers attack the apartment building where they live. As a group of heavily-armed Purifiers - including Jace Turner - surround the building, Fade gets the Frost sisters inside so they can psychically coerce the Strucker kids into leaving with them. Realizing there isn't much time before they use Andy and Lauren to destroy the attack the American government, Johnny volunteers to attack the Purifiers on his own. This allows Reed, Caitlin, Lorna and Marcos to escape while the Purifiers are distracted. Once they are gone, Johnny crawls into an alleyway to wait for the Purifiers, but is found by Erg. The Morlock leader offers his help, and asks Johnny to keep hitting him so he can redirect that energy back at the Purifiers. Johnny and Erg take down the rest of the Purifiers, with Johnny pinning Turner to the ground. At the last second, Johnny chooses to spare Turner's life instead of killing him to avenge Clarice's death.

The Underground are unable to get to Andy and Lauren in time. The Frosts force the Struckers to hold hands and use their powers to destroy the Sentinel Services' D.C. headquarters. The Underground, however, does manage to catch up to the Frosts and the Struckers as they make their escape. Lorna appeals to Esme, pointing out that them forcing Andy and Lauren to destroy that building is no different from the awful things humans once made her and her sisters do for them. With Esme distracted, the Frosts lose control of Andy and Lauren, and Marcos brings the other two sisters down with a blast of light. They then make their way to Reeva's headquarters, where they find Bulk, Fade and Reeva's strike team loading bombs into a van. The two teams start taking shots at each other, and Caitlin kills Fade when he grabs Reed. While each side is pinned down, Reed takes the elevator to take Reeva on by himself. Since Reeva can disrupt a mutant's ability to control their powers, Reed - who cannot control his powers anyway - thinks he has the best shot at being able to stop her. Reed confronts Reeva in her penthouse office. She assures him that he cannot stop the mutant uprising now before using her voice to bring him to his knees. Reed's powers start to disintegrate parts of Reeva's office, but he is unable to use them against her. Reed eventually lets the power consume his entire body before letting it all out in explosion that destroys the top floors of the building, killing himself and Reeva in the process.

Some time later, the Strucker family mourn Reed's death. Marcos and Lorna are reunited with their daughter. Esme uses her powers to manipulate Benedict Ryan into confessing to his relationship with the Purifiers on live television. Erg talks to Johnny, Marcos, Lorna, the Struckers, and Esme about leading groups inspired by them and Reeva's uprising in other cities - effectively rebuilding the Underground. Suddenly, Johnny senses something outside. They watch as a portal opens, and Clarice steps through it. She tells them something's happened, and they need to come with her.

Retrieved from "https://marvel.fandom.com/wiki/The_Gifted_(TV_series)_Season_2_16?oldid=5699625"
Community content is available under CC-BY-SA unless otherwise noted.