Marvel Database
Register
Don't have an account?
Sign In
Advertisement
in: Episodes, The Gifted (TV series) Season 2, 2018, October,
and 49 more

I gave you a cause. I didn't know that cause was doomed.

Andy Strucker has the same dream Lauren had about the two of them meeting in a parking deck. This dream seriously disturbs him, and makes Andy start to his sister. During a test of his abilities in preparation for an operation, thoughts about Lauren cause Andy to lose his focus and fail to break through one of test walls. Reeva talks to Andy about his failure. When he says he had an "off day," she tells him about how her "off day" ended with Purifiers killing a close friend of her's. Concerned that Andy might be a liability, Reeva orders Fade to follow him.

Thunderbird takes Caitlin and Eclipse with him to Philadelphia to talk with Evangeline, the mutant lawyer who recruited him into the Underground, with the hopes that she could help them find the Inner Circle. Although Evangeline is reluctant to help them, with Wire's information she is able to connect the Inner Circle to Reeva Payge. Evangeline, afraid of what could happen if Reeva Payge finds out the Underground is closing in on her, throws Johnny, Marcos and Caitlin out of her office. Johnny, however, goes back up to her office to plead with her again for help. Evangeline gives him the name of a mutant separatist who lives in the sewers under Washington - Erg.

In Atlanta, reports of the blackout in D.C. have caught Jace Turner's attention. He's certain mutants, specifically Lorna Dane, are behind it. Turner's wife and an old friend within the Sentinel Services talk him out of risking his new life by chasing down some conspiracy theory.

Andy tries to call Lauren from a burner phone. When Reed answers instead, Andy ends the call without saying anything. Fade witnesses this and calls Reeva Payge to tell her what he saw. Andy re-takes the trial run, but again fails when thoughts of Lauren distract him. The Frost sisters identify Lauren as the source of Andy's problems. Reeva again tries to talk to Andy about what's bothering him. Reeva prepares to kill Andy when he continues to hide information from her, but Andy suddenly confesses that his mom has been contacting him through an online game, telling him how to get in touch with the Underground. He also tells her about the dream he had of himself and Lauren. Rather than telling him to get over it, Reeva tells Andy to use those feelings.

At the Underground, Lauren confronts her dad about how he's reacted since Andy left. She admits she is still torn up over the 15 people she and Andy killed, but Reed has been too detached from his family to realize it. After Lauren leaves him, Reed's latent mutant abilities again violently resurface. Marcos, still no closer to finding Lorna and their baby, drinks an entire bottle of wine he was saving to celebrate the event. He shines a light through the bottle to create an "aurora" in the sky to let Lorna know he's still out there. Lorna sees this and wants to show her baby, but she finds Dawn is burning up with a fever. 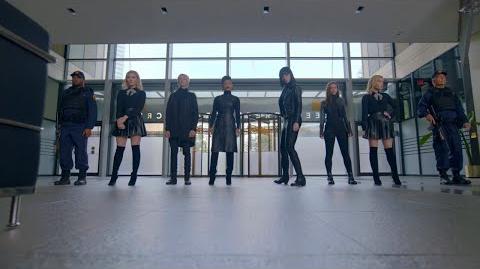