Marvel Database
Register
Don't have an account?
Sign In
Advertisement
in: Episodes, The Gifted (TV series) Season 2, 2018, October,
and 38 more

Lorna's doctor thinks the light Marcos produces can cure Dawn's illness. The Frost sisters find Marcos drinking in a bar and bring him back to the Inner Circle's headquarters. Even though Marcos wants to spend more time with Lorna and their child, Reeva Payge tells Marcos he will help the baby and then leave. Marcos takes Dawn into his arms, and his light appears to alleviate the baby's symptoms. Once her condition is stable, the Frost sisters tell Marcos it is time for him to leave. Marcos, however, fights the Frost sisters so he can escape with Lorna and Dawn. Even though Marcos overpowers the sisters, Reeva Payge's voice causes Marcos to lose control over his powers, backfiring and burning his arm from the inside.

Clarice and Johnny search the sewers under D.C. for Erg, the mutant separatist Evangeline suggested could help them. Deep in the sewers, they are suddenly surrounded by mutants loyal to Erg, the Morlocks. Erg insists he talk with Clarice alone. He shows her the community he and the Morlocks have built in the sewers where they do not have to be afraid to hide their mutation. He agrees to help Clarice and the Underground on the condition that Clarice acts as his eyes and ears above ground. One of the Morlocks is able to tell them the Frost sisters took Marcos.

Reed and Lauren Strucker make a run to Baltimore for medication. En route, Reed's mutant abilities again come out, causing him to accidentally disintegrate their car's steering wheel and the rest of the dash. Without any control over the car, they collide into the back of another vehicle. Both of them are injured in the crash, but are still able to abandon the car and continue on foot. A nearby construction worker investigates the site of the crash, and recognizes the glowing, red energy coming from what's left of the steering wheel as evidence of mutant powers. Meanwhile, Jace Turner has arrived in D.C. so he can show the local authorities his files on the Underground that prove mutants were behind the blackout. He hears about the Struckers' accident over the police radio, and heads out to investigate it on his own. He almost catches up to the Struckers, even seeing Lauren get inside a car Reed hotwired so they can make their escape. On their way back to Washington, Lauren confronts her dad on why he's been hiding his mutant powers from them. When Agent Turner returns to the police station, the chief throws him out after discovering he is no longer with the Sentinel Services.

Reed tells Caitlin about his mutant powers when he returns to Washington. Marcos, still exhausted from his encounter with the Inner Circle, stumbles into John and Clarice's apartment, and swears he wants to hit the Inner Circle back for what they've done. The Inner Circle, meanwhile, prepares for their next move. 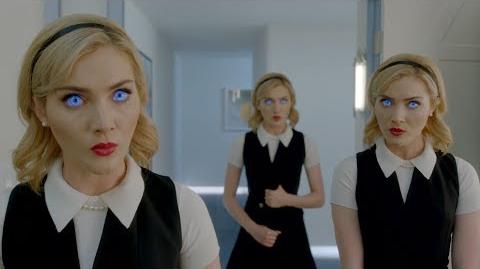