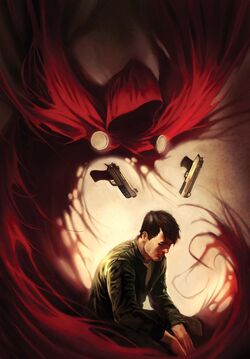 Parker Robbins
Prime Marvel Universe
(Earth-616)
A petty thief, Parker Robbins broke into a warehouse with his cousin one night and shot a demon residing there, killing it. Not wanting to leave empty handed, he stole the beasts' cloak and boots, enabling him to fly and become invisible while holding his breath.

It was not until the Super-Hero Civil War that Robbins was able to truly put these abilities to work for him. Assembling a massive criminal empire, The Hood was largely successful in running a gang of super-villains, and slowly became addicted to the power and respect. When his abilities began to fail him, he turned to other sources of dark magic like Dormammu and the Norn Stones to give him greater power.

His most recent endeavor to attempt to recover all of the Infinity Gems was thwarted by the Avengers, and he was sent back to his prison cell powerless.
Alternate Reality Versions · Television · Video Games · The Hood Comics

The Cabal and Dark Avengers slaughtered by Dr. Doom
(Earth-6091) 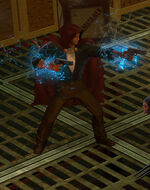 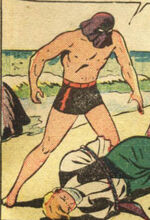 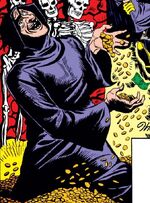 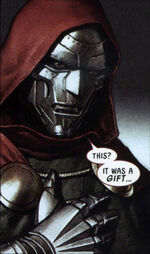 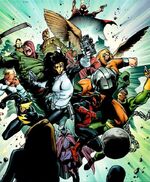 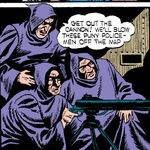 Order of the Hood
Prime Marvel Universe
(Earth-616)
Retrieved from "https://marvel.fandom.com/wiki/The_Hood?oldid=5353426"
Community content is available under CC-BY-SA unless otherwise noted.