"And the Wind Cries Wendigo" 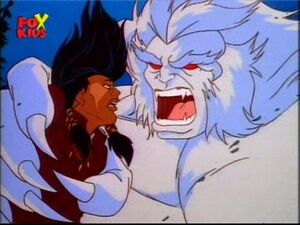 Appearing in "And the Wind Cries Wendigo"

Synopsis for "And the Wind Cries Wendigo"

Betty hears a report about a creature resembling the Hulk, so she heads out to investigate. However, its not the Hulk she runs into, but the famous monster called the Wendigo. Banner rushes to her aid, but is stopped by Gabe Jones and General Ross. He breaks loose, but is shackled to Ross in the process. So, Thunderbolt Ross and the Hulk have to team up and stop the Wendigo before he kills Betty! Can they do it, or will they kill each other first?

Retrieved from "https://marvel.fandom.com/wiki/The_Incredible_Hulk_(1996_animated_series)_Season_1_10?oldid=5269966"
Community content is available under CC-BY-SA unless otherwise noted.