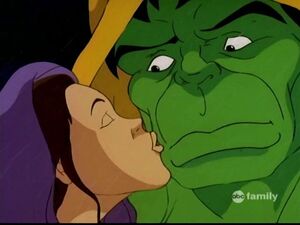 Rick and I got into a little fracas with a very confused green eyed monster. And we're not talking jealousy.

A family is escaping from some guys in a car, when suddenly the Incredible Hulk appears. He smashes the car, and the family thanks the Hulk and calls him friend. But the Hulk walks away. Later, Hulk transforms into Bruce Banner, finds a phone and calls Tony Stark. But the bridge he is standing on collapses. Meanwhile, Rick Jones has made his own way inside Stark Enterprises. But War Machine captures him and takes him to Stark himself. Rick asks Tony if Bruce has contacted him. Rick is given Banner's whereabouts and goes off. Rick finds Bruce under some ruins, but he is transforming into Hulk. Hulk is really angry, and attacks Rick. But Iron Man helps Rick out. Iron Man and the Hulk begin fighting. Hulk gets the upper hand and is ready to kill Iron Man, but Rick calms him down. Hulk transforms back into Bruce Banner.

At Gamma Base, Doc Samson and Betty are making a new Gamma bath for the Hulk, while General Ross and S.H.I.E.L.D. agent Gabriel Jones track the Hulk to Stark Enterprises. Inside Stark Enterprises, Banner wakes up and is welcomed be his old friend Tony Stark. Meanwhile, Rick is looking at Iron Man's many armors, and James Rhodes AKA War Machine is watching Rick for Tony. Suddenly, Rhodes gets a call from Gabriel Jones, saying he knows that the Hulk is in there. James says they can buzz off, but Gabriel sees Rick in the background. The military attack the base, while Bruce's Gamma genes are extracted. But something goes wrong and Bruce Banner hulks out. Outside, War Machine is doing his best, but the military gets inside the building. Suddenly, Hulk breaks free, and Stark puts on his Hulk buster armor to battle the Hulk. The military had taken the new Hulk cage with them. In the heat of the battle, Hulk ends up in the cage, but with some help from Rick, Hulk smashes the cage and escapes the battlefield with Rick. Iron Man and War Machine end the battle by destroying all Hulk Buster robots, and then General Ross and Gabriel Jones decide to vanish.

Retrieved from "https://marvel.fandom.com/wiki/The_Incredible_Hulk_(1996_animated_series)_Season_1_4?oldid=5269938"
Community content is available under CC-BY-SA unless otherwise noted.