"Man to Man, Beast to Beast" 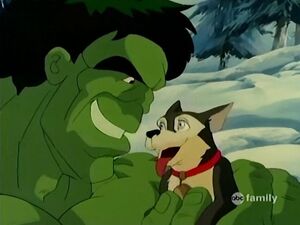 Appearing in "Man to Man, Beast to Beast"

Synopsis for "Man to Man, Beast to Beast"

Banner goes to Canada to find Dr. Walter Lankowski to find a cure for himself. While tracking through the snowy landscape, he falls through the ice and is about to drown because he can't get out of the freezing water. Then out of stress he Hulks out in order to save himself. Once out of the water he finds a puppy and it cheers him up. He then follows the puppy to nearby town and meets the dog's owner who is a young boy. Once the townspeople see Hulk with the boy they panic thinking he's the Sasquatch and attack him. At first Hulk doesn't fight back because they aren't really hurting him but when the puppy accidentally gets hurt in the attack Hulk goes berserk and destroys everything that attacks him. He then leaps into the wilderness after the crushing the town. General Ross and Gabriel then decide to respond to a Sasquatch sighting thinking it's the Hulk. Back in Canada Hulk turns back to Banner and falls unconscious in the cold. A giant Sasquatch then drags Banner back to the cabin of Lankowski.

Lankowski tells Banner he's been working on a cure and that he's found it. When he leaves Banner looks around the cabin and finds a video journal showing Lankowski turning into the Sasquatch. Sasquatch then breaks into the cabin angered by Banner finding the video and starts wrecking things. He then turns back to Lankowski and they decide to try the experiment to cure them. They get in separate chambers but the experiment goes wrong and the boy and his puppy show up scaring Banner into becoming Hulk. Hulk then destroys the machine to save the boy and they leave the cabin leaving an angry Lankowski to turn into the Sasquatch. Sasquatch then finds Hulk and the boy blaming him for ruining the experiment and attacks Hulk. The two fight and the boy gets knocked under the icy water. Hulk then dives into the water to save the boy and the townspeople thank him and see the real Sasquatch. Sasquatch then gets on a floating iceberg and drifts away feeling guilty about hurting the boy and grudgingly accepts that he's a monster. Hulk then leaves when S.H.I.E.L.D. shows up and the townspeople stop them from pursuing the Hulk out of gratitude.

Retrieved from "https://marvel.fandom.com/wiki/The_Incredible_Hulk_(1996_animated_series)_Season_1_6?oldid=5269965"
Community content is available under CC-BY-SA unless otherwise noted.