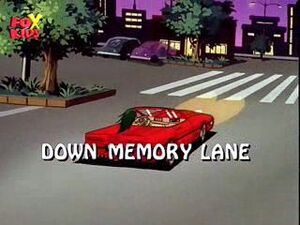 Well, my green heels are dragging and my green eyes are baling. I'd say I've had better days.

Appearing in "Down Memory Lane"

Synopsis for "Down Memory Lane"

She Hulk gets an invitation to her high school reunion and her car gets stolen so Banner and She Hulk run after it. Banner gets cornered by the Leader and Abomination and gets attacked by Abomination. Banner Hulks out and defeats Abomination forcing the Leader to run. When She Hulk catches up to her car she finds out that Gargoyle is the one who stole it as a distraction so the Leader could kidnap Banner and because Gargoyle is in love with She Hulk. She Hulk and Banner go to her home town to visit her parents and to attend her reunion. Her parents are shocked to see what she has become but soon get over it and She Hulk also notices that she is getting weaker.

At the reunion Abomination kidnaps Banner and Ogress attacks She Hulk while Gargoyle offers to help her regain her powers if she agrees to love him. They leave her with that to think about and she becomes Jennifer Walters again. Gargoyle's robots then attack Jennifer and try to kidnap her and Banner sees it from the plane he's being taken away in. It angers him so much that he Hulks out and destroys the robots. Ogress then attacks Jennifer and a pillar holding up a platform at the reunion starts falling and is about to kill several of the reunion guests. Jennifer then grabs the pillar trying to keep it up and Hulks out into She Hulk in order the save the people. She Hulk and Hulk continue to destroy the robots forcing Gargoyle, Abomination, and Ogress to flee. Then She Hulk and Banner leave town.

Retrieved from "https://marvel.fandom.com/wiki/The_Incredible_Hulk_(1996_animated_series)_Season_2_2?oldid=5123531"
Community content is available under CC-BY-SA unless otherwise noted.