A series of flashback shots shows the gamma radiation accident that transformed scientist Bruce Banner into the Hulk, and hospitalized his lover, Dr. Elizabeth "Betty" Ross, making Banner escape from the clutches of her father who wants to use Banner's power as a weapon. Now a fugitive from the United States Army, and Betty's father, General Thaddeus "Thunderbolt" Ross, Banner now works in a soft drink bottling factory in Brazil while attempting to find a cure for his condition with the help of an Internet friend named "Mr. Blue". He also studies martial arts and meditative breathing techniques with a Brazilian Aikido expert to help control his emotions, and has not suffered a transformation for 158 days during his five years on the run.

After Banner suffers a cut, and his blood finds its way into a soda bottle eventually drank by an ill-fated consumer, Ross discovers Banner's location, and sends a team to capture him, led by the Russian-born British special operations expert Emil Blonsky. Following a ferocious battle in the soft drink bottling plant where he transforms into the Hulk, Banner escapes Blonsky, and ends up in Guatemala, from which he travels to the United States, where he sees that a now-recovered Betty is working at Culver University and is dating psychologist Leonard. He also sees his old friend Stanley, a pizzeria owner, who gives him a job as a delivery boy. Banner uses this job to sneak past a Culver University security guard to continue his research for his Internet friend and find the data from the original experiment, but it was all erased. One night Betty visits the pizzeria, and sees Bruce, later reuniting with him. She gives him a USB, containing a copy of their data before the original was erased.

Blonsky reports to Ross that Bruce evaded them in Brazil because of the appearance of a large green monster. Ross explains that the monster is Banner, and that he was created accidentally during an experiment in radiation-resistance that, unbeknownst to Banner himself, was inspired by a World War II era military bio-force enhancement research program, or "Super-Soldiers", as Blonsky puts it. Blonsky, seeking both revenge and power, volunteers as a test subject in order to capture Banner, and receives a small dose of of the original mothballed super-soldier formula made in WWII by Dr. Reinstein and a part of the Weapon Plus program. He leads an assault on Banner at Culver University, during which Betty is knocked unconscious. Despite Blonsky's increased strength, speed and agility, the Hulk crushes most of the bones in Blonsky's body before absconding with Betty to Smoky Mountain National Forest. He eventually calms down and becomes human again.

Banner and Betty then stay at a motel to recuperate. Betty gets him new clothes (including a big pair of purple shorts). While in the shower, Banner hurls up the USB which he swallowed in case he turned into the Hulk. They make out but Banner wants to avoid getting to excited. They travel to Manhattan, where they meet Banner’s "Mr. Blue" Internet friend. They had to avoid use of credit cards, using only money. Banner sends his data to Mr. Blue, but it is tracked by S.H.I.E.L.D. They meet, "Mr. Blue", otherwise known as Samuel Sterns. Accompanying Sterns to his lab, Banner and Betty learn that Sterns has developed a possible antidote that may reverse Banner's transformations after their occurrence but might not prevent future ones, while an overdose would possibly kill him. Despite the risks, Banner agrees to test Sterns' antidote and is restrained before being shocked into transforming with electricity and then reverted to normal with an injection of the serum. Exhilarated by the success of the antidote, Sterns reveals that he has synthesized Banner's blood sample into a large supply with the intention of using it to enhance the human condition to the next evolutionary level. Appalled by what Sterns had done and fearful of the Hulk's power falling into the wrong hands, Banner attempts to convince Sterns to destroy the blood supply but he is shot by a tranquilizer from one of General Ross' snipers. Blonsky then attacks him, demanding he transform into the Hulk and when he doesn't, the former knocks him out.

As both Banner and Betty are taken into custody, Ross tries to convinces his daughter that the one she loves is a monster. Betty retorts that he was responsible for Bruce's condition and that he tried covering it to protect his career. Blonsky, whose super-soldier treatment has healed all his injuries but is desperate for more power, confronts Sterns and demands he subject him to a dose of Banner's gamma radiation treatment. Sterns warns that the combination of the super-soldier serum and a gamma treatment would be an unpredictable combination and the result could be an "abomination". Blonsky however is less than concerned about the possible consequences and Sterns promptly administers the gamma charge. As Blonsky mutates into a monstrous behemoth, he knocks Sterns aside and an irradiated sample of Banner's blood-derivative drips into an open wound on Sterns's temple, causing his cranium to mutate and expand. The Abomination goes on a rampage in the city, hoping to draw out Banner. Banner, realizing that he is the only one who can stop the Abomination, convinces General Ross to release him. He jumps out of Ross's helicopter as it hovers over the city, hoping the fall will stimulate his adrenal glands into triggering a transformation. Banner's plan succeeds and after a violent, pitched battle from the streets to atop a dilapidated building; the Abomination is defeated when the Hulk brutally strangles him unconscious with a huge chain. The Hulk then flees the scene with the Army in hot pursuit.

Thirty one days later, Banner is in Bella Coola, British Columbia. Instead of trying to suppress his transformations, he is attempting to initiate them in a controlled manner. As his eyes turn green, a grin appears on his face. Meanwhile, General Ross is drinking in a bar when he is approached by Tony Stark (Robert Downey Jr.) who reveals that a "team" is being put together.

Robert Downey Jr. appears in an uncredited cameo as Tony Stark at the end of the film. Stan Lee makes a cameo as an old man who gets sick after drinking Banner's blood. Paul Soles, who voiced the Hulk in the 1966 animated series, portrays Stanley. Rickson Gracie appears as Banner's Aikido instructor. Martin Starr makes a cameo as a computer nerd. Michael K. Williams makes a cameo as a New York bystander. Nicholas Rose and P.J. Kerr appear as McGee and Wilson, respectively. 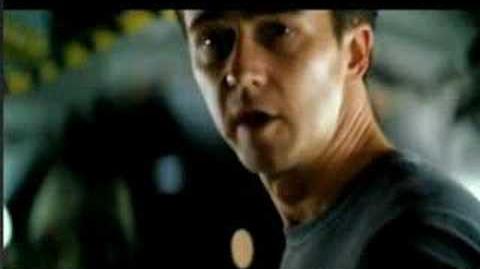