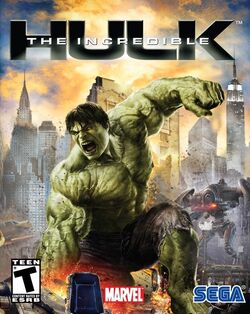 The power, the fury, the rage. Let it out.

The game begins in South America, with Bruce Banner being chased by soldiers sent by General Ross. Eventually, Banner escapes into a factory building, where he would transform into the Hulk. After dealing with Ross's soldiers, Hulk escapes to New York City, where he would save the life of Rick Jones, whom was being held captive by an organization known as the Enclave.

Like this? Let us know!
Retrieved from "https://marvel.fandom.com/wiki/The_Incredible_Hulk_(2008_video_game)?oldid=6462005"
Community content is available under CC-BY-SA unless otherwise noted.