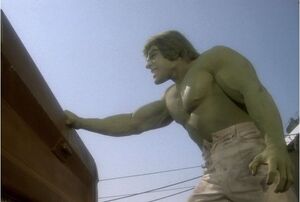 Appearing in "The Waterfront Story"

Synopsis for "The Waterfront Story"

After taking a job in a Texas dock tavern, David becomes immersed in the ruthless world of union politics.

Like this? Let us know!
Retrieved from "https://marvel.fandom.com/wiki/The_Incredible_Hulk_(TV_series)_Season_1_12?oldid=6499182"
Community content is available under CC-BY-SA unless otherwise noted.