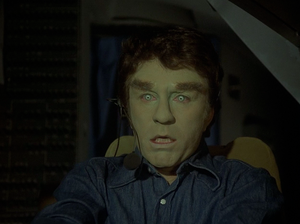 Under the alias of David Brown, David Banner calls a doctor specializing in research of human aggression, Doctor Charles, in the hopes that the doctor can cure his condition and rid him of the Hulk. He calls the doctor's office, but the nurse tells him that the doctor is going to leave town soon, and that he should hurry and catch the next flight there if he wants to get an appointment. David hangs up, and heads for the airport. Elsewhere, in a hotel room, Phil and Stephanie, two thieves and lovers, plot to steal some valuable Egyptian artifacts. At the airport, David shows up for his flight, and is able to board it just in time. Phil and Stephanie are also on board, with Phil piloting the plane and Stephanie posing as a fight attendant. David finds his seat next to an elderly couple, and they introduce themselves. The man's name is Bob, and David and Bob talk for a little while. A few rows in front, a man named Mr. Legitt, who sits next to a young boy named Kevin, and his mother. Kevin is very interested in flying, and he calms Legitt's fears, since Legitt is a first-time flyer.

The plane takes off, and Stephanie waits until the other flight attendant, Denise, is somewhere else on the plane, and then she begins preparing coffee for the pilots. However, she spikes two of the there cups, making sure to drug the other two pilots, but not Phil. She turns her back to tend to something else, and when she turns round again, she finds that someone has taken one of the spiked cups of coffee. Heading into the cabin, she walks the aisles, searching for the cup, and she finds it with Bob, who had impatiently gone to grab a cup before they were passed out. She tells him that the cup had special medicine in it, and was meant for another passenger with a health issue, and he says that he just finished the cup. David asks what the medicine was, and she says it was just a vitamin supplement. She leaves, and fixes three more cups, spikes two, and takes them to the pilots. All three take their cups, and the other two pilots quickly succumb to the drug's affects, and they fall unconscious. Phil, now in complete control of the plane, excuses her, and she steps out of the pilot's room, where she finds David waiting. David explains that Bob is now completely unconscious, and he asks what kind of medicine she put in the cup. She explains that it was just a vitamin, and he asks to speak to the captain. She summons the captain and leaves, and Phil turns on autopilot and comes out to see David. David explains what Stephanie did and that he's a doctor of medicine, and the captain asks him to come with him.

The two head into the cargo hold, and the captain asks David to help him with an internal issue in the plane. He catches David off guard, and manages to lock him in a large metal container. David sees him search for the Egyptian artifacts, and realizes his true intentions. He then opens the door in the hold, and begins moving the container towards the doorway, attempting to push David out of the plane. David becomes overstressed, and turns into the Hulk. The Hulk angrily bursts out of the container, and Phil grabs a gun from his luggage and fires at the monster. Hulk grabs a crate and blocks the shot, and then he throws the crate at him. Neither notice that Phil's stray bullet had ricocheted off of the crate and hit a fuel line. Hulk runs toward Phil and knocks him down, sending him careening through the open doorway and out of the plane. Phil's scrabbling fingers are just barely able to grab hold of the edge, and he clings to the plane for dear life. Hulk walks toward him an tries to grab him, but he slips on the fun gushing from the burst line, and falls out of the plane as well. Phil is able to pull himself back inside, and now he observes the Hulk, who precariously hangs out of the plane. Phil tries to step on Hulk's hand, but the monster grabs his foot and shoves him backward, sending him crashing into the far wall of the hold, where he is knocked out. Hulk pulls himself back inside the plane, and wanders up the stairs to the cabin. Mr. Legitt goes to the bathroom, and, finding the others occupied, mistakes the cargo for fro a bathroom and opens it, and is frightened by the sight of the Hulk, who is standing on the other side. He closes the door, and then cautiously opens it again to make sure he's not crazy, and again sees the Hulk. He hurries back to his seat, and Kevin and his mother try to Mr. Legitt what's wrong, but he says that they won't believe him. He finally tells them about the green monster he saw in the hold, and he then tells Denise, the other flight attendant, and she decides to take a look in the hold just to satisfy him.

Back in the hold, the Hulk calms down and transforms back into David, who finds his luggage and changes his clothes. Denise comes in, and finds David standing over Phil's unconscious form, and the door of the plane wide open. David and Denise shut the door, and David explains the Phil attacked him, and that he had to knock him out. They hear Stephanie over the radio in the hold, who asks Phil if he's finished. David and Denise return to the cabin and enter the cockpit, and are concerned when they find the other two drugged pilots. David tells Denise not to let the passengers know what happened, and he turns on the intercom and impersonates the captain, asking if any pilots are on board, and if they would like to come into the cockpit to see the new equipment. Kevin comes in, edited, but realizes the gravity of the situation when he finds the only two pilots drugged. With no capable pilot able to save them on board, David has Denise request assistance from the control towers at their destination, and they bring in a captain, Bob Brandes, who begins to talk David through the landing. With Kevin and Denise' help, David takes control of the plane and begins flying it.

David follows Bob's instructions, but Bob then asks him to pull up on the wheel, and it doesn't work. He tries again, and it still won't budge. David becomes increasingly agitated, and finally, angry. Just as he begins his transformation, he tells Denise and Kevin to get out, and they leave and find seats in the cabin. David slowly begins to become the Hulk, but with he lives of everyone on board at stake, David tries to fight his transformation long enough to safely land the plane. While struggling with himself and the controls, David begins to ignore Bob's instructions, and the plane hits the runway without damage. David, now almost completely transformed, continues to drive the plane, unable to stop it. He completes his transformation, and the Hulk, now in the pilot's chair, angrily removes the head set, losing contact with Bob. He presses down on the break, but it doesn't work. The plane continues to speed down the runway at an alarming pace, and it causes some damage. Kevin comes into the cockpit and finds the Hulk, and asks what happened to David. Hulk, confused and unable to fly, does nothing, but Kevin points to the break and instructs him to press it harder. Hulk slams on the break, and the plane begins slowing down. Kevin hears Bob's orders through the headset and tells Hulk to turn, and the brute grabs the controls and jerks the plane around a true, nearly avoiding a crash. The plane finally comes to a stop, and its the joyride over, Hulk emerges from the cockpit and scares the passengers. He runs out of the plane and breaks down the door, and he leaps out of he plane and onto solid ground. Hearing sirens, he runs away, knocking down a nearby fence gate and running off into the parking lot, as Kevin and Denise watch.

Later, after changing back, David calls Doctor Charles' office, and the nurse tells him that he missed Doctor Charles, and that she's sorry. she says Charles will be back after several months, and David dejectedly hangs up the phone and leaves the booth.

Retrieved from "https://marvel.fandom.com/wiki/The_Incredible_Hulk_(TV_series)_Season_1_7?oldid=4578847"
Community content is available under CC-BY-SA unless otherwise noted.