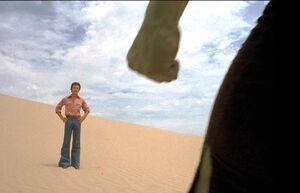 -- David Banner, explaining to Carolyn Fields why he has allowed himself to be considered dead.

There are several flashbacks in this episode, but there is one in particular that affects the chronology of the following characters:

Retrieved from "https://marvel.fandom.com/wiki/The_Incredible_Hulk_(TV_series)_Season_2_1?oldid=5681107"
Community content is available under CC-BY-SA unless otherwise noted.