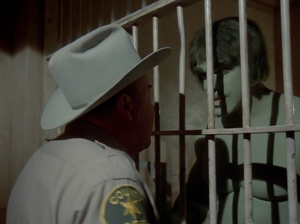 Appearing in "Escape from Los Santos"

Synopsis for "Escape from Los Santos"

David Banner is walking along a long, country road in Arizona. He tires to hitchhike, but cars just zip right by them. David sees a Mexican family working on their truck. He also sees a car speed out of the nearby town, followed by two police cars. A woman is driving the car, and David sees her as she goes by. All three cars pass him. He walks up and sits down next to the town's sign. The sign says "Welcome to Los Santos".

Later, the police drive up slowly, with a policeman driving the woman's car. The woman is in another police car, in custody. One policeman, who introduces himself as Mike Evans, offers David a ride into town in his car, and David excepts. When David asks what the woman did, Mike replies that she murdered her husband. After a brief drive through town, Mike pulls in to the back of the sheriff's office. They walk in with David who is growing more and more suspicious. Finally, they cut the act and throw David into a jail cell next to the woman. David screams at the men to let him out, or at least ell him what's going on. David asks the woman what they're going to do with them, the woman says that they want to kill them. Mike Evans and Deputy Munro re-enter the room, and take the woman away. David tries to protest, but Munro sprays him in the face with pepper spray. As Munro leaves, David becomes the Hulk. Outside the room, the sheriff hears growls coming from the cells, and walks in. He sees the Hulk, who breaks his cell door off of its hinges. Hulk props the door up against the sheriff on the wall, and the sheriff is too weak to move it. Hulk then smashes through the wall, and runs outside. Hulk sees the two deputies with the woman, and he pushes Mike into the open trunk of the police car, and then he tosses Munro over the car. Hulk picks up the woman, and retreats into the night. Meanwhile, two teenagers, Ritchie Forrest, and Teri are making out in Ritchie's car. They're rudely interrupted, and forced to leave, when Hulk shows up. Hulk sets the woman down, and begins to revert back to David Banner.

Later, that night, the woman wakes up, and David tells her that the Mexican family has given them hospitality. The woman introduces herself as Holly Cooper. She says that her husband, Rey Cooper, found out that there was corruption in the Los Santos police force, and that they killed him before he could present his evidence., and they were trying to frame her and David for it.

In the morning, David and Holly watch from the bushes as the sheriff and his deputies leave Holly's house with Rey's evidence files. One the policemen leave, David and Holly enter the house. Holly finds a envelope filled with rolls of film, and explains that all Rey's files wee backed up on the film. They get in Holly's truck outside and prepare to leave, but Mike Evans shows up, and stops them. He has his gun trained on them, and he makes them get out. He then handcuffs them together, and tells the other policemen that he's caught them at Holly's house. He sees the envelope on the truck seat however, and gets inside to retrieve it. David takes this opportunity, and kicks the door closed, and it slams into Mike's legs. Mike drops the gun, and David kicks it under the truck. He then grabs Mike, and rolls him onto his back in the driveway. While Mike is stunned, David and Holly jump in the truck with the envelope, and drive away.

While on the highway, several police cars begin to pursue David and Holly, who are finding it rather difficult to drive while handcuffed to each other. They do end up giving the officers the slip, and they make it to their destination, Jim Chase's ranch. Jim Chase was an old friend of Rey's and Holly believed he could be trusted. Jim meets with them, but when Jim goes to make a phone call, David and Holly see the files that the sheriff took from Rey and Holly's house, inside Jim's ranch. Realizing that Jim sold them out, David and Holly make a run for it, into the woods. While the police send the search dogs out after them, David and Holly flee further into the woods. They come across a giant ravine, with 2 columns at either end, suspending cables over the ravine. Slowly, and still handcuffed together, David and Holly make their way along the cables. They get to the other side, but Holly slips, and David catches her, their handcuffs having saved her. This puts David through great pain and stress however, which releases Hulk. Hulk snaps the handcuffs, but catches Holly and pulls her up. The sheriff and his deputies have found the cables by this time, and started to cross the ravine themselves. Hulk sees them, and uproots the 2 columns on his end, dismantling the cables. The policemen make it back to their end just in time however, and no one gets hurt. Holly terrified by the Hulk, throws a few rocks at him, and runs away. Hulk changes back, and David returns. Holly arrives, with the help of the Mexican family, and they pick David up.

Later, the sheriff and his force set up a roadblock, so there is no way David and Holly can leave in a car. The Mexicans drive up in their truck. After the sheriff looks it over, he lets them pass. Once out of Los Santos, it's revealed that David and Holly were in a trunk in the back of the truck. They finally make it over the border alive, and with the evidence. Later, as Holly prepares to present the evidence to the D.A.'s office, she says goodbye to David, who tags along on the Mexicans' truck, once again forced to move on.

Retrieved from "https://marvel.fandom.com/wiki/The_Incredible_Hulk_(TV_series)_Season_2_10?oldid=5428988"
Community content is available under CC-BY-SA unless otherwise noted.