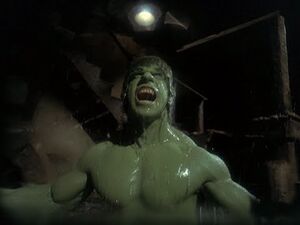 Appearing in "The Haunted"

Synopsis for "The Haunted"

While hitchhiking, David Banner meets a woman who is in the process of moving. The woman introduces herself as Renee Stevens, and David tells her that his name is David Benson. David decides to help the woman move, so they drive to New Hampshire, where her new house is.

Once there, Renee is greeted by an old friend of her family, Ethan Flare. Renee says that she's moving back into her parents' old house, but Ethan tries to sell her a different house. She declines, and she and David start unpacking her items and moving them into the house. Inside, Renee sees a young girl run into a room in the hallway. Renee follows her into the room, which is the cellar. David hears screams, and runs into the cellar. He finds Renee who says that she followed the girl, but the girl scratched her. David patches her up. When David tries to go back to moving things, Renee tells him to wait one more day before they finish unpacking. Later, Renee sees the young girl again from the balcony, still from the back of her. Renee gets David, but when they return to the balcony, the girl is gone. David asks if she got a look at the girl's face, but Renee says she just saw the back of her. Renee takes David to the mill, and shows him the small river inside. David tries to go down near it, but Renee says it's unsafe down there, and that that was where her sister, Becky, drowned. Later, David and Renee meet another old friend of Renee's, Fred Lewitt.

That night, David hears a young girl singing in the house. He creeps around, and hears her. He also sees Renee following the voice. David follows Renee into the cellar, but Renee walks into another room in the cellar, and the doors close behind her. David goes to leave the cellar, but the cellar doors close and lock too. David tries to turn on the lamp on the ceiling, and he gets up on a stool to see it. The light zaps him, and he falls off of the stool. Dazed, he stumbles over to the fencing around the electric generator. David grabs the fencing, and gets electrocuted. David stumbles backwards from the shock and lands ons some crates. Hurt and enraged, David loses control and unleashes the Hulk. Hulk crashes around the cellar, and finally smashes through the cellar door. He runs through the house, tearing it apart in the process. Hulk crashes through several doors and glass panes, and finally sits down in a chair and reverts back to David Banner. Renee walks in the house from outside, apparently having found nothing, and sees a doll in David's hand that he apparently picked up while he was the Hulk. Renee asks him where he got it, and he says that he blacked out. She starts crying, and says that that doll was the one that fell in the river inside the mill. Becky jumped in the river to get it, and drowned.

That morning, David, Renee, and Fred try to figure out what's going on. David refuses to believe that the house is haunted. David decides to have Renee stay in another house that night. Later, David is approached by Ethan Flare again, who hopes that Renee will change her mind about selling the house. David rebuffs him, and he leaves.

Later, David sees Renee talking to herself on a boardwalk. In her mind she is talking to Becky. David sees Renee, who is playing the parts of both Becky and Renee. David asks Renee who she is, and it's revealed that Renee is actually Becky, and that it was Renee who drowned in the mill all those years ago. She says that they have to finish the game, and make Renee drown. She then begins running towards the mill. David chases after her, and chases her into the mill. She locks the door behind her so he can't get in, and David climbs down a ladder into the mill on the opposite end of the mill, but the ladder breaks and David falls into the rushing water. Becky reaches out to David, but she too falls in, and they're both swept up by the current. David starts going around on the water churner, and keeps getting pulled under the water. Stressed out by this, David becomes the Hulk under water. Hulk explodes up onto the surface of the water, and howls at the ceiling. He then picks up Becky and carries her out of the river. Becky sees the Hulk's face, and then goes unconscious.

Later, Becky, who has gotten over her schizophrenia and has made peace with the fact that Renee is dead, and Frank say goodbye to David. David leaves.

Retrieved from "https://marvel.fandom.com/wiki/The_Incredible_Hulk_(TV_series)_Season_2_14?oldid=5511065"
Community content is available under CC-BY-SA unless otherwise noted.