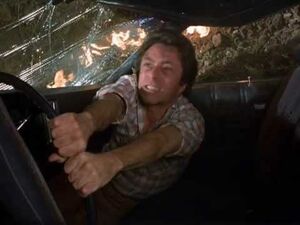 David Banner is walking along the road trying to hitchhike, when a car comes speeding down the road. The car stops, and the driver tells him to get in. The driver is a woman named Rose Sanders. She continues driving like a maniac, and explains that her husband has run off with an older woman and they're at the airport. David tells her to keep her eyes on the road. As the woman continues picking up speed, she keeps jabbering about her husband and how she doesn't usually pick up hitchhikers. Suddenly, another car comes on the road, and swerves to avoid Rose's car. Rose swerves as well, and she and David go careening over the side of the road, and overturn into a ditch. Rose is thrown from the car and knocked unconscious, and David is trapped in the car, but his leg is stuck. David tries to free his leg, but only succeeds in injuring himself even further.The pain and stress cause David to turn into the Hulk. Hulk frees his leg, and smashes out of the car. By this time, the drivers of the other car have stopped, and ran to the ditch to see if Rose and David are alright. Hulk gets out of the car and overturns it towards the drivers of the other car. The two men flee, and the car explodes. Hulk, who is partially on fire, runs away into the wilderness where he falls over, unconscious.

Later, David wakes up in a hospital where a doctor is examining him. The doctor explains that David was in a car accident. When David can't answer any of the doctor's questions, the doctor explains that David had a mild concussion, and as a result, he has temporary amnesia. He also had mild cuts and lacerations on his face, an so his his face is bandaged. Jack McGee shows up at the hospital, and asks Nurse Edith Phalen if he can see the patient involved in the car accident. After Phalen blackmails him by saying she won't give him the room number unless he puts her in his story, Jack agrees and enters David's room, although he doesn't recognize David because of the bandages, and David doesn't recognize him because he has amnesia. Jack asks if David remembers anything at all about the car crash (news of the Hulk being sighted at the crash has spread by this time). David remembers nothing. The doctor says that David had no identification, so that he was labeled as a "John Doe" by the police for the time being. Jack privately consults with the doctor, and they agree that Jack should take David to L.A. to get him hypnotized by a skilled hypnotist in the hopes of regaining his memory.

Later, David and Jack take to the skies on a private flight. They discuss where they're going and and they trie to regain David's memory. After a while, a storm hits, and the flight starts getting rough. Suddenly, the plane is hit by lightning and starts going down. The pilot sends out a distress call into the radio, but the plane crashes in the wilderness. David and Jack make it out okay, but the pilot dies. They grab the pilot's supply bag and medical kit, and build a fire. They decide they'll need to get moving the next morning so that they won't freeze to death when snow hits. However, Jack's leg is injured, so David tends to that first. That night, sitting by the fire, David and Jack discuss David's memory and the Hulk. During the conversation, David gets flashes of memories, but nothing more. He briefly remembers the first time the Hulk emerged, when he pushes Banner's car off of the road at night. Jack recalls the time that he pursued the Hulk to Wilmington, where the Hulk jumped into the middle of the ring during a boxing match, and knocked one of the boxers into the crowd. Hulk jumped over the ropes and looked straight at Jack, before, fleeing the ring and running off into the night. David remembers bits and pieces of this. The next morning, David builds a small stretcher for Jack to lie on, and David pulls him along while they travel.

After a while into their journey, David sees a forrest fire on the horizon, and tells Jack that they need to get away from it to save themselves, and so they won't get arrested when fire fighters and police arrive. The pair continues on into the wilderness, away from the fire.

Retrieved from "https://marvel.fandom.com/wiki/The_Incredible_Hulk_(TV_series)_Season_2_15?oldid=4475964"
Community content is available under CC-BY-SA unless otherwise noted.