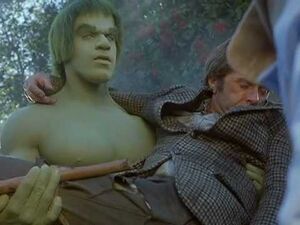 An amnesiac and bandaged David Banner continues to hike through the woods with Jack McGee on their makeshift sleigh. David notices that a wolf pack is active around them, and that eventually, the wolves will attack them. That night, at their campsite, the wolf pack closes in on David and McGee. With Jack's leg hurt, David lights sticks on fire with their campfire, and lights the brush around them on fire, making a circle of flame that the wolves can't penetrate. The wolves leave, but David knows that they'll be back. The next day, they continue to hike through the woods, away from the fire. Meanwhile, a team has already started working to put out the fire. Many firemen and SAR personnel are out and about working to extinguish the growing flame. Elsewhere, David comes up on a hill, and tries to ease Jack down the hill on the sleigh, while, walking slowly down himself. Suddenly, David trips, and he and Jack go rolling down the hill. Jack stops just short of a large ravine, and clings to a jutting out branch for dear life. David stops rolling as well, and tries to help Jack up. Jack tries to help David get him back up, but he goes unconscious. Below him, the wolves have gathered, and are now waiting for their pray to fall down to them. With Jack now completely limp, and David lying on his stomach trying to pull him up, David is in great pain. This, coupled with the fact that Jack is mere feet away from death, outrages David. David turns into the Hulk, while clutching Jack's arm. With Jack still unconscious, Hulk hauls him up onto solid ground, and then pushes a tree over. The tree lands on the opposite side of the ravine, creating a makeshift bridge. Hulk throws the sleigh over to the other side, and then, with Jack in tow, makes his way across the bridge. After getting across, Hulk picks up the sleigh, and walks away, carrying both it and Jack.

Later, Hulk sets Jack and the sleigh down, and sits on a log only to return to being David Banner. David realizes that his face is uncovered, since he pulled the bandages down to his neck when he became Hulk. Noticing that he's shirtless, David pulls his bandages back on, and grabs a spare shirt from their pack. Jack wakes up, and David goes to get him some water from a stream. David, not understanding what happened to him due to his amnesia, gets some water for Jack. He bends down, and looks at his reflection in the stream. Taking off his bandages, David finally sees his real face, and suddenly, memories start to flood in. David remembers everything, and he remembers that he is the creature that Jack has been pursuing relentlessly, the creature that supposedly caused his amnesia, the creature that overturned his car in the rain all that time ago. He is the Hulk. Shocked by this stunning and tantalizing revelation, David is snapped back to reality by Jack, who is calling out for David, wondering where he is. David returns with the water, now fully understanding the potential danger and disaster of the situation. After a moment of looking for the right words, David finally decides to continue the "amnesiac John Doe" facade. David says that he's fine and that they need to keep moving to stay ahead of the fire. After packing up, David and Jack continue their journey.

After a while, David and Jack start to see and smell smoke, and realize that they're dangerously close to the fire. They look through the trees, and see the massive blaze just ahead. Jack gives up hope, and says that it's hopeless and that they'll die here. David tries to keep Jack going by baiting him with the Hulk. He asks Jack if he wants to find the creature. Jack says that he does, and David asks him why. Jack tells him that right now, he's in a mediocre job, he doesn't have a lot of friends, and he's really a lonely failure. His columns haven't done too well, and if he finds the creature, he'll get out of his low-paying, mediocre job, and hopefully hit the big time, and create a new life for himself. David asks what will become of the creature, and if McGee will burn Hulk to gain more for himself. Jack says he doesn't know, and David tells him that he'll never find Hulk if they don't keep moving. They start to walk along the edge of the ditch, where many burning trees and branches are, but a smoldering tree falls on Jack. Jack is able to get clear, but the tree lands on his waist, pinning him. With his hurt leg, Jack is in no condition to get the tree off of himself, and David isn't strong enough to lift the tree either. With Jack pinned under the tree, and being inches away from the blazing fire, David loses control. As he begins the change, Jack looks at him and asks what's wrong. He asks David what is happening, but soon learns what's happening, because where "John Doe" stood, the now massive, hulking figure of the Hulk stands over Jack. The Hulk's face is covered in David's bandages, and Hulk takes them off. Hulk then moves the tree off of the stunned McGee, and picks him up. He races out of the forest, carrying Jack, and stops once they find a paved road right outside of the woods. Hulk looks around, and sees a car approaching them. The car stops in front of Hulk, and the family inside is horrified at the sight of the Hulk. The mother and father keep their distance, but the little girl inside gets out and helps Hulk with Jack. Hulk puts Jack on the hood of their car, and runs off. Jack wakes up, and looks in Hulk's direction. As the Hulk runs away, Jack screams David's fake name, "John".

Later, as David treks down a lone country road, Jack is in the hospital making phone calls, trying to get his editor among other people, to believe that the Hulk is not what they thought, and that an ordinary man becomes the Hulk.

Retrieved from "https://marvel.fandom.com/wiki/The_Incredible_Hulk_(TV_series)_Season_2_16?oldid=4441314"
Community content is available under CC-BY-SA unless otherwise noted.