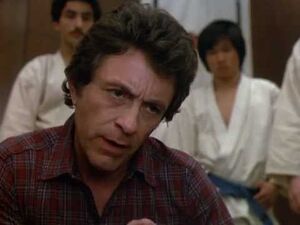 Appearing in "The Disciple"

Synopsis for "The Disciple"

Three cops get word that Joe Lynch, a wanted fugitive, is holed up in a nearby motel. The older cop is Tim Roark, and the other two are his sons, Michael and Collin. Despite his sons' doubts, Tim says that they can handle Joe without backup. The trio goes to the motel, and break into Joe's room. Joe has apparently gone out the window, and Tim tries to follow him. Collin yells for Tim to wait, but Tim doesn't listen and tries to go out through the window. This triggers a bomb that Joe planted, which blows open the wall, and sends Tim flying. Tim gets trapped under some rubble, and Collin tries to help him. Outside, Michael pursues Joe into an alley. Michael fires his weapon and wings Joe, but Joe gets a lucky shot and hits Michael. As Joe gets away with a bullet in his arm, Michael tries to find help.

Meanwhile, Li Sung is teaching a class inside his martial arts school. He does a demonstration that involves him removing his hands easily, from two metal cuffs that are attached to two columns so he can't escape. David Banner walks in, and sits in on the lesson. Li Sung greets David, and the two begin talking. Suddenly, Michael stumbles through the door clutching his wound, and falls over. David tries to treat Michael, and Li Sung tells Michael to remember his training, and to not give into the pain. Later, inside his hospital bed, Michael uses his training, and stops his own heart very briefly, but starts again, and recuperates from his bullet wound. The next day, a funeral is held for Michael and Collin's father, who died soon after their attempt to catch Joe Lynch at the motel.

Elsewhere, Joe Lynch is getting medical treatment from two of his friends. They do what they can for him, and tell him that he should see a doctor. He tells him that he doesn't want to see any doctors.

After recovering from his wound and getting out of the hospital, Michael goes back to train under Li Sung. Michael, who is a black belt, does multiple demonstrations for the class, taking on multiple students at once in several fight simulations. Later, Michael is driving down the street, but he's going over the speed limit, an he gets stopped by a cop. The cop recognizes Michael, and lets him off with a warning. He asks Michael if there's anything he can do, and Michael says he's fine. A couple of hoodlums get angry because the cop let Michael off the hook, and they attack the cop. Michael defends himself and the cop, and takes out all of the men. The men retreat, and leave.

Later, Collin visits Michael and asks Michael when he's planning to come back on the force. Michael says he doesn't know, and Collin gets angry, asking how long Michael is going to continue with the Chinese stuff. Michael says that he needs to sort it out for himself, and Collin leaves.

Elsewhere, Li Sung is teaching David how to do the cuffs trick inside the school at night. Suddenly, Li Sung collapses. David tries to free himself from the cuffs, but only succeeds in cutting himself. Furious, David becomes the Hulk. Hulk breaks out of the cuffs and picks up Li Sung. Michael runs in, and Hulk hands Li Sung over to Michael. The Hulk then smashes through the window, and runs outside. Michael follows Hulk into the city, where Hulk scares several performers, and destroys a spotlight. Hulk runs into an alley, and sits down, slowly returning to his David Banner state. Michael arrives in time to witness the transformation, and helps David. Later, David berates Li Sung for not telling him that he's dying, and says that Li Sung should see a doctor. Li Sung says that he has put off his death for too long, and that he's ready to go. He goes on to say that he also has found his successor, Michael. Michael says that he can't and won't be Li Sung's successor. Michael then leaves to go see Collin. Michael and Collin talk for awhile, about their father's death, and Joe Lynch. Collin gets angry at Michael again, because Michael doesn't agree with Collin that Joe Lynch should die. Michael leaves, and returns to Li Sung's school, where David is cradling Li Sung's lifeless form. As Michael stares, stunned, David explain that Li Sung died, and that there's nothing they can do for him now.

Later, Michael's underworld informant tells him where Joe Lynch is hiding, an old warehouse close by. Michael tells David not to try to stop him, and leaves. David follows, but can't get past the perimeter that the police have set up. Michael flashes his badge, and gets through. Collin is there, and he explains to Michael that they already sent a man inside, but Joe shot him. David tries to get past the police surrounding the warehouse, but gets caught and put inside a squad car. As Michael tries to go in through the side entrance, David's anger rises. A SWAT team arrives, and David tries to yell to them that Michael is inside. They don't see him, and David loses control. Inside the car, David transforms into The Hulk. The Hulk stomps out the floor of the car, and gets under the car. He then overturns the car from the underside, getting the attention of everyone.

Meanwhile, inside, Michael is trying to negotiate with Lynch, who is unwilling to surrender, and Lynch fires his gun, but misses Michael. Hulk bursts through the doors of the warehoue, and runs inside. Michael avoids a tripwire that Lynch had set up, but Hulk isn't so lucky. He sets off two tripwires, activating multiple explosions around the inside of the warehouse. Michael pounces on Lynch, and knocks him unconscious. He then turns to the Hulk, and screams at David to leave. Hulk does, and exits the warehouse. Michael does also, with Lynch in tow. As the police arrest Lynch, Hulk returns to his alter ego, David Banner.

Later, Michael says farewell to David, who once again must move on because of the Hulk.

Retrieved from "https://marvel.fandom.com/wiki/The_Incredible_Hulk_(TV_series)_Season_2_17?oldid=5518175"
Community content is available under CC-BY-SA unless otherwise noted.