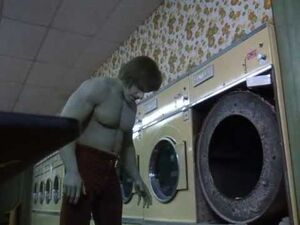 Appearing in "No Escape"

Synopsis for "No Escape"

At night, David Banner is sleeping near a beach at night outside. A police officer sees him, and arrest him on a vagrancy charge. He puts David in the back of his squad truck, and he and another policemen leave for a second. Inside, David meets the other prisoner, Tom Wallace, who starts saying gibberish, and keeps calling David Ramon. The man starts talking about his shock therapy, and how his wife and doctor have conspired against him, and that he's going to kill them. The man then attacks David, hurting him. David gets injured, and becomes the Hulk. Hulk busts out of the truck through the backdoors, and runs through both police officers, knocking them aside, and runs away. Hulk wanders into a laundromat, where he scares two kids. He gets dizzy from staring at the clothes spinning inside the washing machine. Hulk gets angry and destroys the machine. He then leaves the laundromat, and becomes David Banner again. Meanwhile, Tom grabs his things and flees the policemen.

The next day, Jack McGee and a host of reporters question Dep. Chief Harry Simon about the escape, but Jack mostly questions him about the alleged "Hulk sighting" at the truck the previous night. Simon blows off the reporters, and leaves. Meanwhile, David seeks out Tom's house. He goes there, and meet Kay Wallace, Tom's wife. She tells him that she doesn't think Tom is capable of murder, but David disagrees. When Jack McGee shows up at the house to question Kay, David leaves through the backdoor, unseen by McGee. Meanwhile, Tom wanders through the city, and has hallucinations of seeing the Hulk. He sits down on a bench, and sees the Hulk running towards him. However, it's just a jogger, and the jogger runs by him without giving him a thought. Tom finds his friend Robert's house and goes inside. He's greeted by Robert, who gives Tom his typewriter, saying that he saved it for Tom. Tom grabs a stash of emergency money that he had, and leaves to buy new clothes.

Elsewhere, David contacts Tom's doctor, Robert Stanley, and asks if he thinks Tom, in his mentally ill state, would be able to commit murder. Stanley says no, and David tells him that, from what he heard on the bus, Tom Wallace believes that he is the writer, Ernest Hemingway, and that he plans on killing Stanley and Kay. The doctor doesn't believe him, and David asks if Tom has never had shock therapy. Stanley replies that Tom has never had shock therapy. David then calls the police station, and tells Harry Simon that Tom Wallace is an unstable man, and that they should be searching for him. Simon says that they're working on it, and asks who is calling. David doesn't respond, and says that they need to find Wallace. The police trace the call, and find the telephone booth that David made the call in, but David is no where in sight.

Meanwhile, Kay finds a letter for her, but doesn't see anyone around. She opens it, and begins reading it. Tom watches her from afar. He apparently put the letter down. Tom continues to have his hallucinations, in which he believes that he's in Africa. This time, he sees Kay as a nun, sitting under two palm trees. Kay leaves, and Tom sees the Hulk tear down the two trees. Tom flees, but of course, it was just a hallucination. David finds Robert's house and starts asking about Tom. However, Tom shows up and tells them that they're all going on a safari. Later, at a firing range, while Tom is doing target practice, David tries to reason with him. David says that Ernest Hemingway had the therapy, but Tom Wallace did not. He tries to explain to Tom that Tom isn't Hemingway. While David talks, Tom hallucinates, and sees elephants. He fires at them, but only hits his car. He then sees the Hulk on a nearby cliff, and fires. Tom then tells Ramon (David) that he can't trust him anymore, and he and Robert leave. David watches as they drive off.

Later, David follows Tom to his houseboat at the local port. Inside, Tom has Kay and Dr. Stanley hostage. David becomes a hostage himself, but negotiates with Tom to let the other two go. Tom does, but keeps David. Outside, the police have the gangplank to the boat covered. Jack McGee shows up, but Harry Simon won't let him pass. As Kay runs back into the boat, the police fire a smoke bomb into the boat. As smoke begins filling the boat, David becomes the Hulk. Hulk crashes around inside the boat, and the police and Jack see him. A policeman tries to fire at Hulk, but McGee grabs the man's arm and directs the shot upwards. As Kay helps Tom, Hulk runs down the gangplank, and throws two guards who try to stop him into the water. Hulk then runs the length of the dock and dives into the water, swimming away.

Later, David meets Kay, Dr. Stanley, and Robert in the hospital with Tom, who has regained most of his sanity. After a conversation, David leaves.

Retrieved from "https://marvel.fandom.com/wiki/The_Incredible_Hulk_(TV_series)_Season_2_18?oldid=4936071"
Community content is available under CC-BY-SA unless otherwise noted.