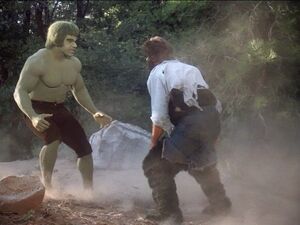 Appearing in "The Antowuk Horror"

Synopsis for "The Antowuk Horror"

Somewhere, Buck Hendricks, a big game hunter, tries to convince Jack McGee to hire him to kill the Hulk, but Jack refuses. The hunter decides to kill the Hulk anyway. David Banner, under the alias of "David Barton", gets a job in the small town of Antowuk, working in a small store. The store is owned by Harlan Bates, who has a daughter named Samantha. Harlan starts pushing David around, but his friend, Brad, stops him from getting in a fight with David. Harlan puts David to work in the store's storeroom, and goes outside with Brad. Bruce accidentally drops a drum, and hurts himself, causing him to turn into the Hulk. The Hulk throws the drum through the roof, and it lands outside, causing Harlan and Brad to run inside. They see the Hulk, who knocks a shelf over, and then turns his attention to them. He knocks Harlan over, and then bumps Brad into a fishing pole rack. Harlan comes at him again, and the Hulk knocks him through the door, out into the street. As confused bystanders watch, the Hulk flees the scene.

Later, the sheriff and mayor, convene with Brad about what happened. Harlan comes up with the idea to use the Hulk as a tourist attraction, so that Antowuk will become more popular. He resolves to take a group out into the mountains, to hunt down the Hulk. Later, articles of Harlan's torn clothing are found in the woods, with no sign of him anywhere. David confronts Brad about Harlan's plan to use the Hulk to popularize Antowuk again, but Brad blows him off. Later, that night, the town has a celebration, with tons of new tourists arriving, hoping for a glimpse of "The Antowuk Horror". During the party, a large, hairy creature runs into town, and crashes the festivities. The creature appears to be a large, unnaturally hairy man, with super strength. The creature keeps howling as it overturns cars and carts. The frightened party-goers quickly clear out at the sight of the thing, which retreats back into the woods. David becomes suspicious, and wonders if the creature was genuine, or an elaborate hoax. The next day, David tells Samantha that he'll find her father. Just then, Buck Hendricks, who had come to town the previous night, walks up and tells Samantha that she shouldn't worry, and that he'll kill Hulk for her. David gets Samantha away from Buck. Meanwhile, in the mountains, Brad is confronted by the strange creature from last night, which is revealed to be none other than Harlan Bates. Brad tells Harlan that he's going too far, and that he's endangering himself, but Harlan doesn't listen. Meanwhile, the town decides to go into the woods with firearms to kill the creature, wether it be Harlan Bates' fake creature, or the Hulk.

David rushes into the woods, and tries to get ahead of the troop, so he can convince Harlan to stop this crusade, before he gets killed by the hunters. When he finds Harlan, Harlan doesn't listen, and instead pushes David down a hill and into a bush. When it appears David died, Harlan, shrugs this off, and walks up the hill. Suddenly, David, now the Hulk, crashes out of the bushes, to the amazement of Harlan. Harlan runs up the hill and uses a pre-placed jack to help him push over a boulder on the Hulk, which is how he was able to overturn cars. The Hulk cracks the boulder in half with his fist, and continues after Harlan. Hulk catches up to Harlan, and the two have a brief scuffle. Hulk pushes Harlan over, but Harlan gets up and confronts the Hulk again. Before either of the two can attack the other again, Samantha, who had known what her father was up to in the woods, runs into the clearing to stop him. Before she can however, she slips on a cliff, and barely catches herself with her fingers. Harlan and Hulk rush to her aid, with Harlan grabbing Samantha's hands, and Hulk pulling Harlan up by the legs. Suddenly, Buck Hendricks, who went into the forest after the Hulk, sees Hulk up on the cliff with Harlan and Samantha, and fires. The bullet hits Hulk in the shoulder, but Hulk is still able to pull Harlan's full weight with only one hand. After getting Samantha and Harlan to safety, Hulk jumps off the cliff, down to where Buck is. Hulk pushes Buck back against a tree, and dismantles Buck's gun. The crowd of hunters arrives, and sees Hulk and Buck, but Hulk runs away. The crowd congratulates Buck on his bravery, and how he stood up to the Hulk. They also interview Harlan, who regrets his actions, saying that Samantha needs a father more than Antowuk needs a monster.

Later, David bids farewell to Samantha, and leaves, needing to move on once more, thanks to the Hulk.

Retrieved from "https://marvel.fandom.com/wiki/The_Incredible_Hulk_(TV_series)_Season_2_2?oldid=4441296"
Community content is available under CC-BY-SA unless otherwise noted.