"A Child in Need" 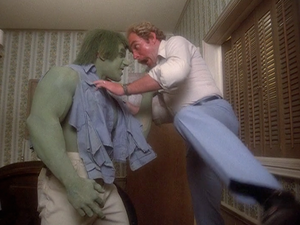 Appearing in "A Child in Need"

Synopsis for "A Child in Need"

David Banner, using the alias David Baxter, gets a job in a small town as a groundskeeper at a local school. After school lets out one day, David finds a boy sitting on a log, crying. David talks with the boy, and sees serious bruises on the boy's arms. David takes him to Ms. Walker, the school nurse, who reveals that she has treated the boy, Mark Hollinger, before. David takes Mark home, and meets his father, Jack Hollinger. David then goes to the pharmacy, where Mark's mother, Margaret Hollinger, works. David asks her a few questions, but she dodges. them. However, David does not notice the bruises on Margaret's arm. The next day, David notices that Mark has new bruises. David asks the Ms. Walker to support him, but she refuses saying that she doesn't want to lose her job over this.

Mark, meanwhile, goes home to his father, who flies off the handle and attacks Mark. David stops by, and hears the ruckus inside. Margaret answers the door, but Jack sees David and pushes him off the porch and into the bushes. David runs around and asks several neighbors for help, but they refuse, not wanting to get involved. This infuriates David, causing him to turn into the Hulk. The Hulk crashes through a wall into the Hollingers' house. Hulk overturns furniture, and throws Jack through a wall. Hulk then picks Mark up, and runs away. Margaret calls the police, who immediately launch a manhunt for the Hulk. Several officers spot Hulk in the city with Mark, who tells them that Hulk is good. They don't listen and pursue Hulk in their squad cars. Hulk overturns a truck, which breaks a fire hydrant, causing a distraction. After losing the police, Mark observes Hulk as he turns back into David. David takes Mark home. The next day, Ms. Walker stops by and agrees to support David on his crusade against Jack, if David can get another witness to back them up. David goes to get the third witness, Margaret. David tells her that if she decides to back them, to meet him and Mark in the school gymnasium.

While David and Mark wait there, Jack shows up at the gym, and attacks David. Mark runs to get help, while Jack makes a punching bag out of David. Jack throws David through the double doors leading to the gym, which conveniently close, blocking Jack's view of David. Behind the doors, David becomes the Hulk. Crashing through the doors, the Hulk pursues Jack through the gym, and finally backs him up against a wall. Jack starts punching Hulk in the stomach, but Hulk only shrugs Jack's blows off, and throws Jack back against the wall. This happens again and again, as Jack remembers how his father used to abuse him. Jack finally stops fighting, and breaks down, begging Mark for forgiveness. As Mark and Jack embrace, neither of them notice Hulk revert back to David. While they're distracted, David leaves.

Later, Mark, Margaret, and Ms. Walker say goodbye to David as he leaves yet again, to move on in his never-ending attempt to find a cure to finally rid himself of the Hulk.

Like this? Let us know!
Retrieved from "https://marvel.fandom.com/wiki/The_Incredible_Hulk_(TV_series)_Season_2_5?oldid=6499209"
Community content is available under CC-BY-SA unless otherwise noted.