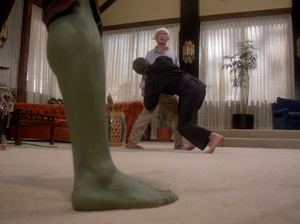 Appearing in "Another Path"

Synopsis for "Another Path"

On a rainy night, David Banner finds a parked truck while wandering on the road. He asks the driver if he can hitch a ride, but the driver snubs him and tells him to get lost. David climbs in the back of the truck, unaware that the driver saw him. The angry driver gets out and of the truck and locks David in the back. The driver starts to freeze the back of the truck with the thermostat, and starts driving. David finds an Asian man in the back, who is meditating. The man is very deep in his meditation, and does not notice David. David starts to pound on the walls of the truck, and yelling to the driver that there is another man inside. The driver doesn't hear him, and David keeps getting colder. David gives his raincoat to the meditating man, and accidentally hurts his hand on a piece of ice. This stresses David very much, and he releases the Hulk. The Hulk begins to rip apart the inside of the truck in a fury, and then starts to pound on the truck wall. The driver starts to warm them up again, but hears the pounding and stops the truck, he gets out and sees the wall being pounded on from the inside. He runs around to the back to open the doors. But the doors break open and fall on top of him. To his surprise, Hulk jumps out of the back, carrying the meditating man, and leaves.

Later, Hulk sits the man down on a log, and turns back into David Banner. When David regains composure, the man invites David over to a fire he made. The man tells David that his name is Li Sung. He is blind, and was on his way to San Francisco, when he climbed in the back of the truck to meditate. The driver had apparently not known that Li Sung was in the back of the truck. Li Sung tells David that he had been meditating in the back of the truck, and demonstrates the control he has over his body, by picking up a hot coal. The coal doesn't affect Li Sung, and David, amazed, asks Li Sung to teach him this control. Li Sung agrees. Later, in San Francisco, David and Li Sung arrive in in San Francisco in Chinatown, and look for Li Sung's school. David and Li Sung run into Li's old friend, Chien Fong. He tells them that the school has moved down the street. They walk in, and watch the teacher, Steve Silva, teach a martial arts class. He stops the class and greets the visitors. After a conversation, he lets David and Li Sung stay there.

At night, Li Sung wakes up and he and David begin snooping around. David gets attacked by a woman with a knife, but Li Sung quickly disarms the woman before she can hurt David. The woman recognizes Li Sung, and runs out of the room. Steve and his pupils walk in, and after another conversation, everyone returns to bed. Li Sung tells David that the woman who attacked him's name is May Chuan. The next day, David goes to May Chuan's address, and is greeted by Gramma Loo, her grandmother. May explains to David how Steve Silva is just an evil businessman. David suggests she go to the police, but she says that no one around trusts the police. Later, David, Li Sung, Chien Fong, his son, Ling Sun, Gramma Loo, and May Chuan all gather in May's apartment to assume a course of action. Li Sung claims that Steve is his problem and that he'll defeat him. A date for a duel is set, as the town waits with baited breath.

The day of the fight, Li Sung knocks David out, so David won't try and stop him, and goes to face Steve. David wakes up, tied to a bedpost. He tells Gramma Loo to free him but she refuses. David turns into the Hulk once she leaves the room, and Hulk escapes through the window. Li Sung enters Steve's school, and Steve's pupils begin attacking him. As he starts fighting off the students, and moving upstairs towards Steve's room, the Hulk enters the school and starts manhandling any pupils that Li Sung missed. Simon Ming, Steve's manservant, flees to Steve's office, to warn him of both impending dangers. Li Sung enters, and he and Steve begin their duel. The Hulk enters, and he chest bumps Simon across the room, and into unconsciousness. Li Sung easily fights off Steve, and he soon knocks Steve out and wins the fight. Hulk leaves.

Later, David decides to hang out with Li Sung a little longer before leaving.

Retrieved from "https://marvel.fandom.com/wiki/The_Incredible_Hulk_(TV_series)_Season_2_6?oldid=5570209"
Community content is available under CC-BY-SA unless otherwise noted.