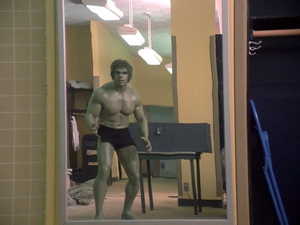 I know exactly what you mean, doctor.

David has gotten a new job as a trainer for a football team, under the alias of David "Burnett". During a practice, he witnesses a player, Kermit Connelly, get injured. While there, he begins to form a relationship with star player, John Tobey. One night, at Tobey's house, David hangs out with John, a friend from the team, and June, John's wife. The next day, David talks with John's doctor, Byron Stewart, and learns that John has an anger management problem. David then sits in on one of John's sessions, and learns that John harbors serious hate for his father, after John's father cheated in a father-son football game. As days go by, John's anger grows, and David tries to help him. David says that John shouldn't play in the upcoming championship game, but John scoffs at the idea.

In the locker room, David is accosted by two of the team's players, who want John to win them the championship game. David tries to explain, but the men keep tormenting him. They finally lock David in the steam room, which triggers his transformation into the Hulk. Hulk breaks the room's door off of its hinges and topples it onto the men. Hulk knocks them around a little, and one of them swings a football helmet at him. Hulk blocks it, and it breaks on his hand. After smacking the guys around, he leaves. Later, the guys try to explain it to Coach Haggerty, but he doesn't believe them. Later, June asks David to try and reason with John. When that doesn't work, he goes to Dr. Stewart, who is less than willing to help. David explains that, since John can't confront his dead father about the father-son football game from his childhood, he'll turn his aggressive feelings towards the other team's quarterback, and probably end up killing him.

The day of the big game, Coach Haggerty, angry at David for being late, tells security to keep him off the premises. When David tries to get in, they block his way. David tries to buy a ticket to the game from a scalper, but when that fails, David is forced to climb the fence. Security sees him however, and locks him in a room with other riffraff, away from the game. The other guys in the room are listening to the game on the radio, and get annoyed when they can't hear it over David's yelling at the guard. One of the men grabs a can from the table and throws it at the back of David's head. It connects, and David becomes the Hulk. The men hear the Hulk's growls, and turn to look at David. Imagine their surprise when they see the Hulk standing there in the tatters of David's clothes. The Hulk smashes the through the window and plummets, landing on the ground below. He runs around the area, until he finds the stadium.

Meanwhile, on the field, John has jumped on the other quarterback, and is beating the tar out of him. Hulk runs onto the field, and, to the crowd's amazement, pulls John off of the quarterback and hoists him onto his shoulder. With John over his shoulder, Hulk begins running down the field, knocking over the other players. Hulk finally drops John at the other end of the field, where John attacks him. Unfortunately for John, who desperately needs to beat up someone at the moment, the Hulk's strength is vastly superior to his, and all John succeeds in doing, is getting tossed back on his butt. John rushes Hulk again, and this time, Hulk picks him up by his shirt, and drops him again. Hulk then grabs John's head and forces him onto his knees. Hulk lets John go, and runs away, crashing through the doors of the stadium. Later, David says goodbye to John and Judy, John having confronted his feelings about his father. After a small conversation, David leaves, forced to move on once again because of his dangerous alter ego.

Retrieved from "https://marvel.fandom.com/wiki/The_Incredible_Hulk_(TV_series)_Season_2_8?oldid=4342026"
Community content is available under CC-BY-SA unless otherwise noted.