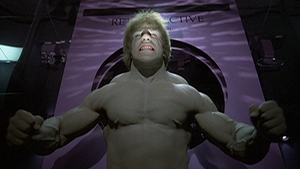 It seems the reports of my demise were very exaggerated.

Two thugs, Jim and Gary, sit in a car outside of the Slater's department store, waiting for it to close. Gary goes over the plan that he made, and he tells Jim, his brother, that he worked hard on this while Jim was in prison. Inside, David Banner, under the alias of David 'Bishop', has gotten a job there and is working over-time that night. He talks to the security guard, Raymond Harmell, and then he talks to a fellow employee, Karen Mitchel. She goes to the manager's office and meet the manager, Mr. Edwards, and they talk business, but he hits on her and she leaves. Edwards locks up and leaves, but David and Karen stay, as well as Raymond, who has been instructed by Edwards to see an eye on David, as he suspects him of casing the building for a robbery, since he's turned down many raises and promotions. David and Karen change incorrect price tags on clothing, and Raymond leaves to walk around the store. He runs into Jim and Gary, who hold him at gun-point. They walk him into the clothing aisle where Karen is, but David is not here, as he had left to do something. They go into the vault room and close the door behind them, leaving them alone in the room with he vault. David walks up to the door and has the thugs talking inside, and he hears Karen and Raymond. Inside, Gary begins panicking, as he had't planned on the hi-tech vault door, since they had only had a small, easily crackable one when he had worked there a month ago to case the building. Karen explains that only Mr. Edwards can open it, and that it's on time lock, so it can't be opened until tomorrow morning. The thugs resolve to stay until morning. Outside, David leaves, and he runs through the store tying to get out, but all the windows are barred for security purposes. He gets to Edwards' office, where he finds the combination for the vault.

David leaves, but accidentally makes some noise, which is heard by the other four in the vault room. Jim leaves to check it out, taking his gun, and he catches David. They take the elevator down to the basement, and he locks David inside the elevator shaft at the bottom, with the out of use elevator hanging over him. Jim leaves, and the cable begins to break. David watches in horror as the elevator slowly descends, about to crush him. He begins panicking, and turns into the Hulk. The Hulk reaches up and presses against the bottom of it, and he smashed through it. broken elevator parts fall around him, and he breaks down the door and explodes through the wall, fleeing into the store. Hulk wanders through the store, and comes across a green mannequin. He stuffs it, and seemingly begins to develop feeling soft it but when he touches it, he pushes it over on accident, and it falls over, knocking others down as well. Confused, Hulk runs away to another part of the store. He comes across the toy section, and his foot hits a control panel on the floor, which turns on all the toys. They begin making all manner of noises, and he observes the, still confused. A toy robot bumps into his foot, and he looks at it, and then looks up to see a large toy tank approaching. It fires a suction dart, which sticks to the Hulk's chest, and, Hulk, pulling i off, angrily stops o the tank, breaking it. He wanders into a Smithsonian exhibit, where he looks at the many glass vases and objects in the room. He looks up to the mirror on the ceiling, and sees himself, and he roars. The sound reverberates across the walls, causing the glass to shake. Hulk runs out.

Back in the vault room, Jim returns, and delivers the sad news of David's apparent death by the elevator. Gary begins panicking again, saying that he didn't want to kill anybody, and Raymond angrily attacks them, making an attempt at Gary's gun. They hit him, and push back against the wall near Karen. They suddenly hear a gong, because back in the main store area, while returning to his human form, David knocks over a gong. Jim goes to see what the source of the noise was, and he takes his gun. He passes several mannequins, including David, who changed out of his ripped clothes into new ones and is now posing as a mannequin. Jim walks away, but as soon as David moves to leave, Jim returns and catches him. He takes him back to the room, and Karen and Raymond are overjoyed to see that he's alive. He immediately begins putting on a charade, pretending to be another burglar, and he says that he wants 1/3 of the money in the safe. Karen and Raymond become angry, but David signals Karen by mentioning something that they had talked about her mealier as a way to insult her infant of Jim and Gary, but she picks up on it and begins playing along. He explains that their plan to stay until morning is stupid, because Edwards comes in with armed guards in the morning, and when Jim prepares to shoot him, David say that he can shoot him, but that he's the only one who knows the combination, and that he has it. He gives Jim the key to the jewelry depart that the took from Edwards' office as a show of good faith for their partnership, and Jim leaves to collect the jewelry, leaving Gary to stand guard outside the door with the other gun. Inside, David clues them in on what he's doing, and Raymond is relieved that David isn't a thief.

Jim walks through the store, and finds David's torn shirt that he took off as Hulk when he saw the green mannequin, and he finds the combination paper in David's shirt pocket. He goes back to the room, and shows David the combination, saying that he knows that David is lying. He uses the combination, and opens the vault. Taking the money, he locks them inside, but before he closes the door, David tries to turn Gary against Jim by saying that Jim will double cross him. Jim pushes him and shuts the for, but it shuts on David's foot. He pushes David's for in and shuts it, locking it. They turn off the air inside the vault, and Raymond tells them that they won't have long without it. Raymond and Karen look down and notice something is wrong with David, as his transformation has been triggered. Jim turns out the lights inside, and he three are plunged into darkness. Karen whispers that there's something in there with them, and Raymond strikes a match from his pocket. The match lights, and he stares into the face of the Hulk. Hulk blows out the match, and they're returned to blackness. Hulk breaks the lock on the vault door and breaks the door off of the hinges, and it topples onto Gary and Jim. Jim is able to free himself, but Gary is pinned, and Karen grabs his gun from the floor. Hulk chases Jim through the halls, but loses him. Jim finally comes to a stop in a another art of the store, and he looks behind him, looking for the beast. not seeing him, he urns bad to face hiss wont, and runs right into the Hulk. They're right by the exercise equipment, and he picks up a barbell and throws it at Hulk, who shrugs it off. He runs, and Hulk picks up a barbell and hurls it at the mans' legs, sending him crashing to the floor. The police begin to arrive, having been called by Raymond and Karen, and the Hulk smashes through one of the barred windows, and he runs off into the night.

The next morning, Karen and Mr. Edwards meet with the store owner, Mr. Slater, who demotes Edwards from manager to a lower position in their stock, and he gives Karen Edwards' job. Elsewhere, David leaves, walking down a road trying to hitchhike.

Retrieved from "https://marvel.fandom.com/wiki/The_Incredible_Hulk_(TV_series)_Season_3_11?oldid=5174011"
Community content is available under CC-BY-SA unless otherwise noted.