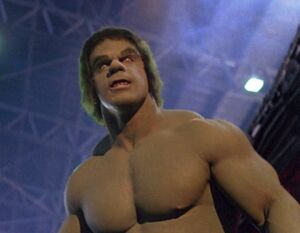 On a quiet, peaceful night, Jack McGee sleeps soundly inside his house, until his dreams become nightmares...

In his dream, he is being chased through a desert by the Hulk. No matter how fast or hard Jack runs, the Hulk always seems able to catch up with him. Finally, an exhausted McGee collapses, and falls prey to the Hulk. As Hulk towers over McGee, he reaches towards his face, growling.

Suddenly, Jack wakes up in a cold sweat. Inside the National Register building, Patricia Steinhauer, the daughter of the company's boss, has temporarily taken over while her father is away. When Jack shows up to work, Patricia asks him and Mark Roberts to come to her office. Once there, she explains to them that, while she's in charge, they're going to run a very different, very efficient paper. She explains that they're cutting all articles about UFOs, or the unknown/supernatural. McGee, fearing that the Hulk may fall into this category, asks about the Hulk. She tells him that she's not going to have any articles in her paper about some creature that may or may not be real. She explains that her goal is to sell papers, and that the Hulk is old news. Jack storms out of the office, and takes his Hulk file to the roof, and begins setting pictures inside it on fire with a lighter, and tossing them off of the roof. Patricia and Mark see Jack on the roof, and think he's going to jump off. They rush up, and try to negotiate with him. Jack, who wasn't planning on jumping, realizes what's going on and takes advantage of the situation. He says that he won't jump if she'll let him continue his Hulk stories. She reluctantly agrees, and Jack comes away from the edge. Jack and she agree that he'll continue the stories if he can prove to her that the Hulk is real.

Later, in her office, he explains how his whole obsession with the Hulk started, about how he thinks the creature killed David Banner and Elaina Marks, and how he first encountered the creature face-to-face in Delaware at the boxing match. He tells how the Hulk landed in the ring and knocked one of the boxers into the stands, about how Hulk looked right at him and ran, and how McGee pursued him and finally lost him in an alley outside the building.[2] He recounts how the Hulk saved his life once, in Las Vegas in a construction yard,[3] and he tells her about how many people have seen the Hulk, like when Hulk ran through Times Square,[4] and when Hulk was in the boxing ring in Delaware, and several other instances. He explains how he spent time with "John Doe", the man who becomes the Hulk (David), after the plane crash when David had amnesia and a bandaged face a while ago, and how he finally found out that a normal man, "John Doe", becomes Hulk at certain times and then changes back.[5][6] Later, Jack goes home for the night to get some sleep, and has the nightmare again.

The next day, Patricia tries to get Jack to see that the Hulk is becoming an obsession for him, and that he should try to forget about the Hulk for a little while, but Jack refuses and says that he can't. Meanwhile, at a steel mill somewhere, the Hulk runs out of the mill, and right past a bewildered worker.

Later, Jack gets a phone call from the steel mill worker, and the worker tells him that he heard about the reward for information leading to the Hulk's capture, and he also says that the Hulk is one of his workers. Jack leaves and gets on a flight to the state where the mill is, and Patricia realizes that she can't stop Jack from going, so she joins him. Later, at the mill, the worker directs them past several other workers, and points to one of them, and tells them that the man is the Hulk. Jack takes out his tranquilizer, and calls "John"'s name. "John" sees Jack, and takes off running, heading into another part of the mill. Jack tries to get past several workers to fire his gun, but is accidentally pushed down the flight of stairs leading to "John"'s location. "John" continues running, but hurts his arm. While running, he maneuvers between hot coal bins and sparks from metal, but finally hurts himself again and falls down. As he lies there, his temper rises, and his increasing stress, coupled with the pain from his injuries, becomes too much. "John" becomes enraged and transforms into the Hulk. Jack, Patricia, and the worker catch up just in time to see the Hulk rise from the floor. Hulk roars at them, and starts running again, in the opposite direction. They follow Hulk, who bursts through a wall, and topples several coal crates in their path. By the time they get past Hulk's obstacles, Hulk is gone. Patricia turns to Jack, finally believing that Jack was telling the truth...the Hulk is real.

Back at the Register, Patricia informs Jack that her father is returning to the paper, and that she will no longer be working there, and Jack and Patricia embrace. Meanwhile, "John Doe" treks down a deserted country road.

Retrieved from "https://marvel.fandom.com/wiki/The_Incredible_Hulk_(TV_series)_Season_3_13?oldid=4441333"
Community content is available under CC-BY-SA unless otherwise noted.