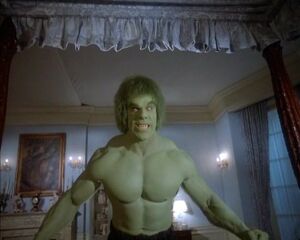 It's over John. Take off the mask.

On a waterfront somewhere, the Hulk runs along the pier, with Jack McGee in hot pursuit. Hulk runs through some garbage cans, and is seen by the garbage man. Jack McGee gets directions from the man, and continues the chase. Elsewhere, the Hulk scares away several bystanders, before finally sitting down on the doorstep of a house. He turns back into his alter ego, David Banner, and Jack runs by on the opposite side of the street. David runs down the dock and jumps into a boat. Skipper, the owner, asks David what he's doing back here, since he just drove David back to shore. David tells Skipper that he was mugged, and tells hm to drive him back to the island. Skipper gives David a blanket to cover himself with, as his clothes are all ripped up, and he leaves. Jack runs down the dock and sees Skipper driving away with a suspicious man in a blanket in the back, and he puts the pieces together and realizes that the man in the back must be John Doe, the man who becomes the Hulk.

Meanwhile, at the Powell Estate, a mansion on an island near the mainland, Diane Powell puts on her makeup in the mirror. Her butler, Pierce, tells her that he rearranged a room in the house for the party the next night, and she tells him that she doesn't care what he does with the old stuff from the room. She also tells him not to appear too friendly with her friends, as he's not 'in the 90-percent bracket'. Pierce leaves, and another man, Alan Grable comes in, saying that he thinks they haven't spent as much time together recently, and that his wife has enough information to destroy him in a custody battle, as he is having an affair with Diane. She blows him off, and leaves. She goes into the library, where David, under the alias of 'David Beldon', has gotten a job as her librarian. She tells him that she would burn all these old books of her father's, but David says that they'e quite interesting, and that her father was a genius. She asks if he'll stay for her party the following night, but he declines, saying he has to leave for very personal reasons. Annoyed that he won't stay, she leaves in a huff. Back on the mainland, Jack bribes the Skipper, and gets him to drive Jack close to the island, and he'll sum the rest of the way. That night, at dinner, Diane eats with David, Alan, her cousin, Donald, and his friend, Carlo. Diane tells David that Donald came to visit from a European film festival, and that he's come to hit her up for some money to fund his new film that he's trying to make. Diane rebuffs him, and she also scoffs at Alan when he tries to persuade her to go to a disco on the mainland after dinner. She says that she's too sad to dance, since David is leaving. she tries to persuade him to stay for the party again, but he says that he really must leave. She asks the others if they think David should stay. Alan tells her that she should let him go if he really has to leave, but she says he'll sty, as she is backed by Pierce and Donald. She tells David that he will stay for the party, as she is the only one who can provide him with a boat to leave the island. Satisfied, she walks out, and David follows her. That night, David tries to sneak out, but is caught in the kitchen by Pierce, who threatens to keep David here until Diane lets him leave through any way he can.

The next night, Skipper drives Jack close to the island, and Jack swims the rest of the way in a wetsuit. Once on land, he changes into his costume he brought in a bag. He also arms himself with a tranquilizer gun to subdue the hulk if necessary. At the party inside, many guests arrive, but a dejected Alan just stands and watches the guests. Diane gets ready in her room, and she goes into the library to see if David will come out and enjoy himself. He tells her that he doesn't much care for the company, and she tells him that he can leave with the last guest. Not getting a response, she leaves. Jack walks in in costume, and begins profiling people, looking for a costume with a mask, figuring that John Doe will be hiding his face. The lights dim and a coffin opens in the middle of the room. Diane climbs out wearing a black dress and hood. She welcomes them to the Vernal Equinox, the party, and tells the crowd that she, 'Persephany', will return to the land of the living at midnight. She blesses them, and he lights turn on, and everyone begins dancing and talking. Jack sees a man in the corner,and approaches him, but the man tells Jack to leave him alone, and leaves the party room. Jack follows him. He opens the door into the library and sees David, only David's face is obscured by the lamp on the desk. David bends down and unplugs the lights, plunging them into darkness. He ides behind a shelf, and Jack calls his name, John Doe, knowing that it's him. David pushes a ladder to a top shelf over on him, and runs out. Jack follows him, but David crashes into a vase while running. He continues, but his hurt shoulder from the vase flares, and he trips and falls down the stairs and into another vase. This turns hm into the Hulk who gets up to see Jack coming down the stairs. Jack stops and takes out his tranquilizer. Hulk picks up a grandfather clock, and Jack shoots, but the clock blocks the dart, and Hulk throws the clock into a table. Jack tries to reload his gun, but Hulk pulls the carpet on the stirs out from under him, and he falls down the stairs. Hulk runs out, and Jack follows. Hulk walks into he party room, where all the guests are, but amid the colorful costumes, no one pays Hulk any attention. One obviously drunk woman compliments him on his 'costume', but a confused Hulk walks away. Jack runs in and tries to follow him, but the woman distracts him, but he is able to get away from her and follows the creature. He finds a costume closet, and walks in, where a cornered David, who has transformed back, has thrown on a pirate costume and mask from the racks of costumes. Jack takes out his tranquilizer, and tells 'John' to take off his mask. David explains that all he wants to do is et rid of the Hulk, an asks why Jack won't leave him alone. Jack explains that the Hulk has killed people, including Elaina Marks, but David says tat she died in the fire, and that the Hulk tried to save her, and he's also saved Jack McGee multiple times. Jack says that David will be able to prove this in court, but David says that if Jack uses the tranquilizer, it could kill him as it has enough juice for the Hulk, who is much stronger He says that Jack is risking awakening the Hulk again, but Jack blows him off. David pushes a costume rack over on Jack, and runs out, and he locks Jack inside. Inside the party room, it has just struck 12, and Diane, as Persephany, takes off her black hood and dress to reveal her white dress and crown under it. Someone comes up from behind and pushes her over the edge of the balcony she's on, and she falls ver and clings to the edge, as the astonished crowd watches from below, Donald and Carlo help her up, and Donald takes her back to her bedroom to get some rest.

Jack asks around seeing if anyone has seen David, describing his costume, but Donald, who learns that Jack is a reporter, tells Pierce to take Jack out, as he wasn't invited. Meanwhile, David goes into Diane's room and he tries to persuade her to let him leave, but she pulls a gun on him, erroneously thinking that he was the one who tried to kill her because she wanted him to stay. She makes him get into he closet, ad she locks the door. Alan comes in, but she blows him off again, and he takes a scarf and begins choking her with it. Realizing that David didn't try to kill her, she manages to slip the key under the closet door while being choked. David unlocks the door, and bursts out, tackling Alan. They fight, but lan begin shutting David's head in the closet door. Pierce hears the commotion while escorting Jack out, and they run in to see what's going on. Jack tackles Alan, and David, whose head is still jammed in the closet door, turns into the Hulk. The Hulk gets up, and throws Alan onto Diane's bed. He grabs the tranquilizer gun from Jack and crushes it in his hand. He turns, and breaks one of the bed posts, collapsing the bed on Alan. Hulk walks over and picks up the unconscious, Diane, pushing Pierce away. He walks out of the room and outside, where he puts Diane down and sits down next to her, reverting back to David. Diane gets up, and hugs a shirtless David, crying.

Later, Diane says goodbye to David who is leaving on a boat. She admits that she treated everyone poorly, and she apologizes to David who accepts it. she kisses him, and he leaves.

Retrieved from "https://marvel.fandom.com/wiki/The_Incredible_Hulk_(TV_series)_Season_3_21?oldid=4475976"
Community content is available under CC-BY-SA unless otherwise noted.