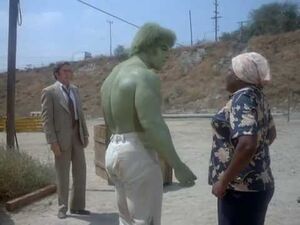 Episode Title
"Behind the Wheel"

Driving a taxi can be a dangerous job, David.

Appearing in "Behind the Wheel"

Synopsis for "Behind the Wheel"

David Banner, using an alias, interviews for a job as a cab driver, and his new boss, Colleen Jensen, gives him the job, because he's nice, needs the job, and because he's one of her only workers who can read a map. When David doesn't believe her about this, she calls over Jean, another worker, and she asks him to read the map on the wall and tell her which way is south. After much thought, he finally answers correctly, and David tells her that he understands. Her heart begins acting up, but she takes her pills, and ignoring David's suggestions about her heart, she shows him to his car, and tells him that he can get started. Jean later asks her if she thinks this will work, and she says that if David says long enough, other guys will see that he's staying, and they'll hopefully follow his example and come work for her. Once David leaves to pick up fares, a man named Swift comes in, with his henchman, Sam, and they try to muscle Colleen. Swift tells her that he'll legally get her company soon anyway, and that she should just hand it over now, as he'll make it worth her while. She says that she didn't know what she was doing when she took out the loan she needed from Swift, and that she'll pay him back. He says that he knows she will. The two men leave, and Swift tells Sam to hurt David badly enough to the point that he'll stop working as a taxi driver because of the 'danger' posed by the job. Later, David is washing his car inside the company's grade, and he's observed from Colleen's office by Colleen and Jean. Jean tells her that she should level with David about how Swift has been having his enforcers muscle her employees so hat they leave, and she goes out and tells David if he wants to continue his job, as there's a lot of risk involved with being a cab driver. He says he does, and she returns to her office.

Later, David is on the road with a pregnant woman in the back, when he's suddenly rammed in the back by Sam, who is in a car behind him. Sam drives up next to him , and slams his car into David's side, and the two begin pushing their cars into each other. Sam finally pulls back and drives off, and David continues to a hospital for the woman. He begins running out of gas. Most of the stations along the roads are closed, but he finally plus off into an open station but the lines for the gas are wrapped around the parking lot. He tries to get people to let him get ahead of them in line, but thy don't buy his 'pregnant woman in his car' excuse. He walks up to the door of the stations and tries to reason with the owner, but he tells them that he's closed. David persists, and he shuts the door on David, who's hands caught in the door. The man opens it and angrily pushes David off of the doorstep, saying that he should leave, as they're closed. He goes back inside, and David, stressed, turns into the Hulk. Hulk goes inside and begins tearing the place up, Sam approaches the front of the building, and sees the Hulk. Hulk walks into the car garage next to the station. He walks up to the car inside, and bends down to look under it. The mechanic who said they were closed is working on the car on the underside, and he looks up and sees Hulk, who roars in his face. Hulk picks the man up and walks outside, but drops him and runs away once he hears police sirens, and Sam also leaves. Later, inside the garage, David tries to explain to Colleen why he needs to leave, and that it's a personal matter. She tells him that he can't leave yet, as she's very low on employees, but he protests saying he has to leave. Her heart begins having trouble again, and she takes her pills. She explains that her father died, leaving her with his company and a lot of bills, but that it's her life now and she needs to not lose it. David reluctantly agrees to stay on fora little while longer, and Colleen, overjoyed, hugs him. Meanwhile, Sam breaks the news to Swift that he didn't kill David, but that he'll kill him he next time. Swift says he bette get it done.

David picks up a fare at a local hotel, and he's followed by Sam, who is driving a yellow pick-up truck. David waits for his fare, and they arrive, and get into the back. David panics, because his passenger is Jack McGee. David puts on his driver's hat and a piar of sunglasses, and tries to disguise his voice. Jack introduces himself, and explains that he's a reporter, and that he's in town because he heard that the Hulk was spotted in town a while ago. David tries to make conversation in order to tun the subject off of the Hulk. Suddenly, Sam speeds through the street and tries to hit David,w ho swerves and avoids the collision. David loses Sam in the shuffle of cars on the road, and he finally arrives a Jack's destination, the gas station from yesterday. Jack tells him to wait there, and he gets out and talks to the mechanic. Jack explains that there's a $10,000 reward out for information leading to the Hulk's capture, and he asks about the cab driver that came by yesterday, suspecting him of being 'John Smith'. The man tells him to get out his checkbook, and Jack inquires about this. The man points to David and says that he's the one, and Jack turns to look at David, who backs out of the station and drives away, leaving a stunned McGee behind. Sam returns and dejectedly informs Swift of his failure, and Swift says that if he messes up again, he's out of a job. Swift begins talking with another henchman, Magee, who prepares some drugs that Swift is planning to sell.

David returns to the taxi garage, where he hurriedly explains to Colleen that things have changed, and that there's a reporter in town who can make his wife difficult. He tells her not to say anything about him when McGee arrives, and to I've McGee his jacket, which had still been in David's cab when he drove off. Colleen's heart acts up again, and she drops her pills. David picks them up for her, but examines them, and realizes that Colleen has been playing him, as the tallest are nothing more than a sweetener for coffee. She admits that she lied about her condition, and tells him that he'll be up front with him. She explains that she took out a loan from a loan shark named Swift when the company was just starting, and now, Swift, who hasn't been paid back, wants the company. He's been hurting several of her cabbies, including two named Eric and Dwayne, and that he's scared off all of her employees accept Jean and David. David says that he'd like to stay and help, but that needs to leave, and Colleen understands. David packs his bag and walks out, but Sam jumps him from behind, knocking him out. He puts David in the back of his car and drives away, and Jack McGee, who is crossing the street, to get to the taxi garage, sees Sam and tries dos top him. He runs inside and tells Colleen, and she drives away, and tells him to call the police. He does, but he commandeers one of the cars in the garage and follows them.

Sam arrives at a construction site, where Swift is making his business deal with several other thugs. He brings David in to show Swift, but Swift is right i the middle of the meeting, and he's angry that someone could've followed Sam. He assure Swift that no one did, and Swift tells him to get rid of David. Sam takes him outside and throws him into a crater in the ground, and he trust on one of the machines, that is sucking all the debris down into the machine and putting on a conveyor belt, where it's shredded. David sinks into the dirt, and a rock rolls dow into the crater and hits him, and he becomes the Hulk. Sam watches, amazed, as Hulk comes down the conveyor belt. Hulk jumps off and stops the belt, grabbing the machinery on top and ripping it off, breaking the machine. He tosses the machinery into a small pond next to the site, and Sam makes a run for it. Hulk follows him and grabs him before he can get into his car, and he throes Sam into a mud hole. One of the thugs inside the small building goes outside to see what's gong on, and Hulk throws him through the window and into the room. The me run for it, but Hulk stops them, and he tosses Swift into an outhouse. Colleen arrives, and watches the confrontation unfold, and Jack arrives as well. Hulk approaches Colleen, and the two stare at each other. Jack takes the opportunity and grabs a mallet leaning up against a fence, and he sneaks up behind the Hulk, preparing to knock the behemoth out. Colleen breaks her gaze on Hulk and looks at McGee, prompting Hulk to turn and notice McGee. Hulk stares at McGee, who drops the mallet. Hulk hears sirens, and runs away, as Jack and Colleen look on.

Later, after saying his goodbyes to Colleen, David skips town.

Retrieved from "https://marvel.fandom.com/wiki/The_Incredible_Hulk_(TV_series)_Season_3_7?oldid=4441327"
Community content is available under CC-BY-SA unless otherwise noted.