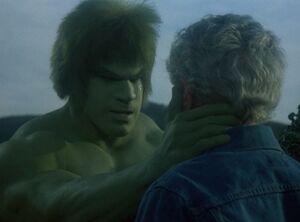 In an apartment room, David Banner, who is staying there, watches TV and the newscaster, Joanna Stein, explains the current situation in Treverton, David's home town. A businessman, Dane Eckhart, wants to build on the farmers' land, but they grow a good crop there. There are very destructive worms destroying the crop, and local biologist, Helen Banner, assures the viewers that she's certain that they'll eradicate the bugs by Thanksgiving. David is surprised to see his sister Helen on TV, and he reflects on a fond childhood memory of the two meeting at a secret place in the woods that only they knew about. David packs his bags, and heads for Treverton.

After riding a bus through the night, David gets off in the morning at Treverton, and from the bus stop, he sees a bench by the sidewalk. He walks up and observes it, remembering a time when he sat on this very bench while his mother read to him. He walks away from the bench. Meanwhile, Helen gets a call from someone asking for her father, DW Banner, and she tells them that he's not in. Elsewhere, DW is in a plane with his pilot, Steve Howston, and they fly high in the skies, spraying a chemical over the crops, which will supposedly kill the bugs. They land, and DW leaves. He gets a call from Dane Eckhart at his house, and he explains that he won't let Dane build on the farmer property. Meanwhile, David walks through a neighborhood, and is seen by Helen, who drops a glass she was carrying. she runs to David and embraces him, claiming that she didn't know he was alive. They go back to her house, and sit on the porch with drinks, where they catch up. David doesn't tell her that he's the Hulk, but he explains that he has a disease, and that he may have to leave at any time. She takes him inside, and explains that he can help wit their crop problem, as he's a biologist. After guilting him into staying to help, they get to work on a pesticide to kill the bugs. Later, David puts flowers at his mother's grave, but he is forced to flee when he sees his father pul up in his truck, also there to put flowers at his wife's graves. David hies. While there, he sees a caterpillar on the ground, and thinks of the Hulk. The similarities between his metamorphosis to Hulk and a caterpillar's metamorphosis to a butterfly gives him an idea. He returns to Helen's lab, and they continue working. They work long into the night, and finally, they decide to get some sleep. That night, David has nightmares about his mother's death, and about how his father didn't get her to a hospital in time to save her. His dreams begin stressing him out, as he dreams of himself as an adult running to save his mother, who dies before he can reach her. He sits up in bed suddenly, and is transformation begins. Helen walks in and sees him sit up, and she watches as he begins to become the Hulk in bed. Hulk stands, and growls at her, but he begins to calm down when she tries to communicate with him. He turns and sees a picture of DW on the nightstand, and he becomes angry again, apparently feeling and sharing David's resentment of his father, as David blames is father for his mother's death. Hulk grabs the picture and cracks it, and suddenly runs out. Helen follows him, but he is much faster, and she jumps in her true and follows him. The Hulk runs through the countryside, and the wind being to pick up. DW Banner is sitting inside his home having breakfast, when he hears a growling outside, and he looks outside the window and sees the Hulk. Hulk roars at DW's house, and he turns and overturns a truck full of hay bails behind him. DW grabs his rifle and steps outside, preparing to shoot the Hulk, but the behemoth sprints away into the woods, with DW hot on his trail. He finally catches up, and finds Helen sitting in a clearing, hugging a shirtless David.

Later, inside DW's home, David and DW try to talk, but they still resent each other a little. David and Helen talk, and David tries to explain that he doesn't blame DW anymore, it's just that he may not be able to stay for long, and that it has nothing to dow with family issues. Meanwhile, in his office, Dane assigns his henchman, Croft, to start a chemical fire at Helen's lab, ruining any chances they have of destroying the worms, which will allow him to build on their property if all the cops are destroyed. That night, David lies in bed, but hears an intruder. He looks over and sees Croft, who snuck in. Croft accidentally sets off something, which makes a loud noise, and David runs and tackles him. Croft pushes David into a table and runs out. The next day, David presents his idea to the two, which is to create a pesticide which will prematurely mature the worms, turning into bales, which are harmless to the crops. They both congratulate him. They get to work on, it trying to finish it in time for Thanksgiving. After completing it, David and DW drive to the runway where DW flies in the plane to spray the pesticide. David and DW they to come to terms with each other, and they both explain their side of things, but they're still at odds. Just then, they pull into the plane area. Elsewhere, Dane Eckhart learns from one of his chemists of the Banners' plan to beat the worms his chemists developed, and he assigns Croft to make sure that Steve Howston and DW don't survive their net plane flight.

DW goes into the supply house to get Steve, and David bends down and crouches under the plane, noticing a gas leak in the bottom of the plane. He steps out from the bottom, and is hit over the head by Croft, who drags him into a tent and throws him under a table, behind an oil drum. DW and Steve begin taking off, and David, recovering, runs out onto the runway, trying to stop them. He runs as fast as he can, and is able to grab onto the wing as it leaves the ground. He grabs the back seat of the plane, and DW sees him. David turns into the Hulk, and DW watches him turn into the creature, finally understanding David's paranoia of being noticed by the public. David, now fully Hulk, holds the side of the plane as it ascends into the air. Steve notices Hulk, but the plane begins malfunctioning due to the gas leak. The wing that Hulk is standing on begins to break, as his weight turns the plane to one side, and he uses his strength to keep the wing from falling off. Steve begins bringing them down, and they land safely on the runway. The Hulk jumps off, and runs into the woods, but DW follows him. Hulk stops and listens to DW, who tells him to leave, as people will find him. Hulk doesn't want t leave him but he grows agitated b DW's yelling and grabs his head, growling. He begins to cry, and DW says goodbye. Hulk touches his face, and cuts their emotional moment short by running away before any bystanders find him.

Later, Helen is questioned by Jack McGee in the Banner home, and outside, DW hands David his travel bag. They have a silent understanding, and the two embrace. David leaves, and DW goes back inside, inviting Magee to dinner. He gratefully accepts, and the three sit down and cut the turkey. Elsewhere, David walks down a road, trying to hitchhike.

There are several flashbacks in this episode that affect the chronology of the following characters:

Retrieved from "https://marvel.fandom.com/wiki/The_Incredible_Hulk_(TV_series)_Season_3_8?oldid=5476121"
Community content is available under CC-BY-SA unless otherwise noted.