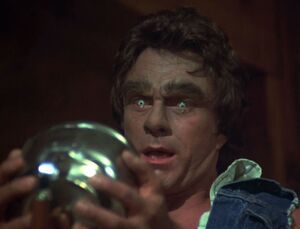 -- David Banner after seeing that he's only transformed halfway

Inside a military base, Colonel Harry Appling and several others at the base pick up a meteoroid, filled with gamma radiation due to being near the sun, is heading straight for Earth. Apling's people gather that the meteoroid should land somewhere in Utah. Meanwhile, in Utah, David Banner is fishing near Lake Utah by a large dam. Suddenly, he hears a cry for help, and sees a woman in the water a couple yards away, holding on to some rocks for dear life. He runs towards her, and holds out his hand to try and pull her out of the water. However, David slips, and goes tumbling into the water. Together, he and the woman get pulled downstream by the strong current. Finally, they come to an abrupt halt, and David and the woman manage to get out of the river and onto the bank. The woman introduces herself as Katie Maxwell, and she leads him towards her home. But as they talk, she tells David that she's blind. When they get to her cabin, she tells him that one of her brothers made a cable for her to follow when she's outside, but today was the first day that she tried to find her way around without it. As they talk, she begins making some soup for David. David learns that she is a quite adept piano player, and she tells him that she's working on a piece about the feeling of blindness. Katie goes to her room and changes her clothes to get into something dry, and then she and David go out into the woods to take a walk.

Meanwhile, the military tracks the meteoroid, which has by this time entered Earth's atmosphere. The meteor, as predicted, speeds towards Utah. Meanwhile, a small concentration of soldiers gather near Utah to prepare to extract the meteor, and cordon off the area around it as soon as it lands. Jack McGee shows up at their location, and starts asking questions. When no one is looking, Jack swipes a military outfit from one of their vehicles, and changes into it. Meanwhile, David and Katie hear the sound of the approaching meteor. David looks up, and sees the meteor fly over the trees. Suddenly, there is a loud crash, and the whole woods shake, making David and Katie fall down. David helps Katie up, and helps her head back to her cabin. Once she is a safe distance away from it, he leaves to investigate the meteor. Eventually, David finds the meteorite, and slowly approaches it. However, he finds that the nearer he gets to it, the stranger he begins to feel. David's head begins to hurt, and he stumbles and falls. However, as he falls, he puts out on of his hands behind him, but his hand lands on a beehive. Bees begin swarming out of the nest around David. They begin crawling all over him, stinging him. This triggers his transformation, and the Hulk is unleashed. The Hulk angrily swats at the bees, to no avail, and he finally picks up the nest, and throws it far away into the woods. With most of the bees having been on the nest, the others quickly dissipate. Turning his attention from the bees, Hulk slowly walks towards the meteorite. Hulk begins to feel strange as well, and reaches out and touches the meteorite. He doesn't realize that the meteorite is still very hot with radiation, and it burns his hand. Angry again, Hulk runs off into the woods. Back at the cabin, Katie hears noises from outside, and goes to see what it is. Suddenly, the door breaks down, and she begins hearing angry growls and snarls. Finally, the noise begins settling down, and Katie reaches out and touches the source of the noise, Hulk. The Hulk, who had found his way back to the cabin, grows tired, and sits down, beginning his transformation back to David Banner. Katie, feeling that this thing may be David, calls his name. David is halfway through the transformation, when it abruptly stops. Katie reaches out and touches his face, and what she feels is incredible. David asks for something to see his face in, and Katie gives him a teapot. He looks at his face in the reflection of it, and is shocked to see that he has apparently become stuck halfway between his Hulk form and his David form. Perplexed as to why this has happened, and frustrated, David angrily smashes the pot on the dining room table. Elsewhere, the military begins to move out to collect the meteorite.

Meanwhile, David has climbed down, and changed into some new clothes that aren't ripped and torn. There is a knock at the cabin door, so Katie hides David inside a closet, and then opens the door. A couple of soldiers have come to collect Katie, since they're trying to move all civilians out of the area. Katie goes with them, leaving David behind in the closet. Later, inside a military jeep, the soldiers stop and report to some other soldiers. Katie uses the distraction, and runs away into the woods, heading back to the cabin. When she gets there, she lets David out of the closet, and the two begin heading towards the meteorite crash site, because Katie thinks that David's transformation problem may be because of the meteorite. They find the site, but soldiers begin closing in on the area, and they see David and Katie. David tosses away a fallen tree in their path, and they move closer towards the meteorite. The soldiers begin moving towards the meteorite, but they become more interested in David. From the screens at their base, Apling and other military personnel see David, and become intrigued. Helicopters begin moving in as well, and the mounting stress of the situation finally sends David over the edge. David snaps, and his transformation is triggered. He turns from his half Hulk half David form, and goes back to full Hulk. The Hulk roars at the surrounding soldiers, and Jack McGee sees the Hulk from one of the jeeps. The Hulk uproots part of a tree, and throws it at one of the helicopters. The tree hits the back of one of the helicopters, and sends it spiraling out of control, it lands in time for the soldiers inside to get out, but as soon as they get clear, it explodes. With the Hulk standing right in front of the meteorite, the soldiers don't want to risk getting closer. Soldiers begin moving in with guns, and another military helicopter comes, and attached to it's underside via a cable, is a giant, red, dome-shaped containment unit. The device begins to slowly descend towards the Hulk. The military designed the device to contain the meteorite, but they have a new interest in Hulk, and assume that he may be of extraterrestrial origin. The device lands on the ground, completely covering Hulk and Katie. Then, the underside, which was compacted into the walls of the device, activate, and cover the ground as well. The device then begins ascending, carried by the helicopter, with the Hulk and Katie inside. As soldiers return to their jeeps, the helicopter returns to base, with a very angry, captured Hulk.

Retrieved from "https://marvel.fandom.com/wiki/The_Incredible_Hulk_(TV_series)_Season_4_1?oldid=4475979"
Community content is available under CC-BY-SA unless otherwise noted.