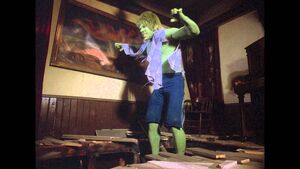 David Banner walks along a deserted country road, trying to hitch-hike. A car drives by, but ignores him and drives right past. He sees it go off the road just ahead, and he rushes over to help. A young woman is inside, and he helps her out. Opening up the car's hood, David sees that it's shot, and they both walk to the nearest as station. As they walk, David tries to talk to her, and introduces himself, and he learns that her name is Christy. They stop for a rest, but a truck drives by, and an African-American man beckons them to get in. They do, and he introduces himself as Isaac Whittier Ross. He drives them to a nearby ranch, and they go into a barn near a saloon on the property. While David talks with Isaac, Christy sneaks away, and tries to drive off in the car. However, she is stopped by an older man with a rifle before she can get away. Inside the barn, Isaac hits David on the back of the head, knocking him unconscious.

When David wakes up, he finds himself on the ground inside a mine shaft. Isaac and the other man, Roy Darnell, have himself, Christy, and another man at gun-point. David picks himself up, and Isaac explains to the three that his ancestors left behind a fortune in old this plantation when they were slaves, and the he intends to find it. He tells them that they'll be given food, clothing, and shelter, so long as they do as he tells them, and that as they do their share of work. Christy immediately protests, but Isaac shuts her down and leaves with them with Roy, who makes them begin mining and cleaning out the shaft hime he watches them, gun in hand. David takes the opportunity and introduces himself to he other man, who introduces himself in turn as Marty Gibbs. Marty tells him that he had a brother, Harry, and that Isaac kidnapped them both, and when David points out an opening in the rock that they could escape through, Marty dejectedly tells him that Harry tried that, not knowing how deep the hole in the opening was, and that he died when he finally hit the bottom. Later, they all meet in the saloon for dinner, but Christy refuses to eat hers. Isaac walks in and talks to them for a little while, and leaves.

Slowly, the situation begins to ware on them after a number of days, especially Christy. One afternoon, in the saloon, Roy notices that Christy is barely speaking, and not eating. He walks over and begins spoon-feeding her, as she is almost catatonic, and David begins watching, concerned. Roy pulls her out of her chair and begins dancing with her, and David tells him to stop. Roy, angry, points his gun at David and Marty, and makes them both stand on the small stage in the saloon. They do, and Roy says that since they're both 'tough guys', they should fight and see who is tougher. They both initially refuse, but Roy starts taunting Marty, making jabs and quips about Harry. Marty becomes angry to the point of insanity, grabbing his head and shouting. When Roy doesn't stop, Marty does the intended result; he grabs David and begins beating the tar out of him. David screams at Marty to stop, saying that Roy is doing this, but Marty continues punching him, completely out of control. David finally crashes through the stag, and lies under it, in pain. Marty turns to the others, and under the stage, David turns into the Hulk. The Hulk crashes up through the stage, and Marty and Christy run out of the saloon while Roy trips and falls in his confusion. Hulk watches the other two go, but focuses his attention on Roy. Hulk grabs the piano next to he stage and slides it across the room, and Roy narrowly dodges. The piano crashes into the wall, and Roy, who has retrieved his gun, fires and misses, hitting the chandelier above Hulk. The shot spooks Hulk, who runs out of the bar, crashing through the window, and the porch railing. As Christy and Marty watch from across the road, Hulk walks away, out into the countryside. Isaac finds them and stops them from leaving, and Roy catches up with them, and he tries to explain to Isaac what happened. Isaac doesn't believe the story, and tells roy that he won't tolerate drunkenness on his work force. He sends Roy and the others back to the mine, and he leaves to look for the missing David.

Elsewhere, Hulk treks along a deserted road, and he finally sits down beside a bush and reverts back to David Banner. Isaac all walks alone the road, and he finds David, sitting by the bush. Not inquiring about David's destroyed clothes, he takes him back to the ranch at gun-point. Later, after giving David a new set of clothes, he leaves David, Christy, and Marty working in the mines with their heels chained together. Isaac privately talks with Roy outside the mine's entrance, and Roy, drunk, angrily tells Isaac that they agreed that after a certain amount of time, Roy would be allowed to call in professionals to drill there. Isaac refuses, saying he wants to find the god himself, and Roy remarks that Isaac sure needed his help when he killed a security guard a while ago, but he doesn't need it now that he has what he wants. Isaac, angry says hat they won't call an professionals, and that's final, before storming off. Roy, angry walks away with his bottle of whiskey. In the mine, David, Christy, and Marty have been working at their restraints with a pickaxe, when Isaac returns. Suddenly, Roy, completely drunk, stumbles into the shaft with a handful of dynamite. He lights the fuse of one stick, and tosses it at them, but Isaac snuffs it out and chases him out of the mine. David and the others break open the wood boarding up another shaft, and as they escape through it, Roy blows up the opening to the mine with dynamite, trading Isaac under some rubble. David leaves the others to help Isaac, but the mine case in, burying him. Christy and Marty realize there's nothin they can do, and they escape.

Under the rubble, David hulks-out, and the Hulk bursts out of the rubble, and pulls the metal support beam and rubble off of Isaac, freeing him. He runs out of the mine towards Roy, and he hurls a late rock, which hits Isaac's truck. Roy keeps tossing dynamite, as he flees towards the saloon. Hulk follows him in, and Roy tosses another stick at Hulk. Hulk catches it and examines it, but he's uninterested in it, so he tosses it behind he bar. It explodes blowing up the saloon and throwing Roy through the window. Inside, Hulk its up off of the floor, having been thrown by the blast as well. After surveying his surroundings, Hulk walks out of the saloon, and leaves.

Later, Christy and Marty drive away in Isaac's truck, with Isaac and Roy restrained in the back. He asks her what she plans she plans to do, and she tells him she's going home. Elsewhere, David walks away, trying to hitch-hike.

Retrieved from "https://marvel.fandom.com/wiki/The_Incredible_Hulk_(TV_series)_Season_5_6?oldid=4441345"
Community content is available under CC-BY-SA unless otherwise noted.