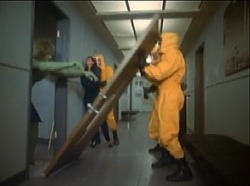 Well Buddy, I wish you could talk and tell me where everybody in this town is.

Appearing in "A Minor Problem"

Synopsis for "A Minor Problem"

After trekking through the countryside for a while, David Banner finds a small town. He walks through the town, but to his surprise, he doesn't find anyone. He makes his way to a lab, where he apparently was accepted for a job application, and he takes out his acceptance letter from his bag, and looks over it. He finds no one at the lab, but he does find a deserted sandwich and cup of milk on a bench. Moving on to look for other people, he walks through the neighborhood, finding toys in yards, but no people. Realizing that all the houses are vacant as well, he walks back to the other part of town, and begins looking through the local stores. He walks into the park and finds many blankets laid out with picnic lunches on them. He looks up and sees a banner announcing a town picnic, explains all the deserted lunches. He hears a low whining sound, and finds a small dog walking along. Bending down to pet it, he jokingly asks it where everyone in the town is, and he also looks a the dog's collar which sports its name, Buddy.. Suddenly, a phone rings in a phone both near them, and David runs into the booth and answers the phone. To his dismay, no one answers, and after frustratedly asks if anyone is there, he hangs up the phone, and walks back to Buddy. He hears a crash from a nearby building, and quickly leaves to investigate.

He finds the building, noting the open front door. He leans it and asks if anyone is there, and after hearing no answer, he comes back out. Suddenly, a woman jumps out from around the building's corner toting a rifle, and she tells him to hold it. She asks him what he's doing there, and he tells her that he was there for a job interview. Not believing his story, she asks how he got past the road blocks. He asks about the road blocks, having not seen any on his way in. She tells him that they set them up when they evacuated the town. Before he can answer, they both see a helicopter flying over the town, and she quickly takes him around the corner. David asks why the town was evacuated, and the woman coldly remarks that Mr. Cunningham probably already told him. When David says that he doesn't know a Mr. Cunningham, she sarcastically says that he probably doesn't know about what Cunningham referred to as 'a minor problem'. When David asks about this, she tells him that there was a little chlorine leak at the lab. David asks if that was why the town was evacuated, since chlorine couldn't kill anyone, but she tells him to stop it, since they both know that it was bacteria e coli. He asks if she's sure that it was e coli, and she says that she is, and that she's going to prove that it was e coli and not chlorine.

Meanwhile, a car drives into town, and three kids get out. One of the two boys, Mark, tells the girl, Rita, that she had a great idea to drive to this town to take whatever they want ice everyone evacuated. The other boy, Tom, says that they should probably leave, but Rita says that it was just some chlorine that got released. Elsewhere, David tells the woman that he isn't with this Cunningham man, and that if he was, he would've known about the leak and he wouldn't have come into town without protective clothing. He reaches into his bag and hands her his job interview letter, and after reading it, she owes her gun and apologizes, saying that she had to do this, since Cunningham would do anything to keep the truth from getting out. She tells him that the scientists at the lab were experimenting with dangerous chemicals, including e coli, even though they didn't have the facilities to conduct such experiments, and Cunningham paid the health inspectors to not say a word. She explains that she has to get an important files from his office at the lab that contains the truth, but David tries to get her to see the danger of staying in the town. She says that bacteria only lives 48 hours outside of a host, and after that, there will be no way to prove that this happened without the papers. David asks if there's an infirmary at the lab, and when she confirms this, he explains that there will most likely be an antibiotic there that can kill the e coli, and if there isn't there will at least be another that can slow the effects long enough for them to get to a hospital. Buddy, who followed David, walks into the alleyway and collapses, and they load him into her car, and they get in.

The three looters walk into the park, and Rita begins eating the untouched cakes that had been aid out for the picnic, unaware that they're contaminated with e coli. Mark and Tom see David and the woman attempting to leave in the car, and they stop when they see the looters. They grab the, and David tries to tell them the danger that they're in. They disregard him, and David elbows one of them in the chest, and he and the woman begin running. Ria tackles the woman, and they begin fighting. Tom and Mark throw David through a shop window, and they rush to help Rita, leaving David lying in a pile of glass. Over-stressed and very angry, David's transformation begins, and he becomes the Hulk. Tom and Mark hold the woman so Rita can punch her, but before she does, they all look up after hearing a loud growling. The Hulk emerges from the broken shop window, and the three take off running, leaving the woman behind, and she runs away. Hulk chases after Mark and Tom, who find a cannon in the park. Tom hides behind it, but Mark trips, and Hulk catches up with him. Picking him up, Hulk throws him into a nearby table. He picks himself up and begins running, but Hulk moves on to Tom, who is still hiding behind the cannon. He reaches through the openings in the cannon's wheel, but Tom dodges, and runs into the bushes. Hulk rips the barrel off of the cannon, and throws it into another table. Rita tries to start their car, but it won't start, and Mark runs up and gets in. Hulk sees them escape, and he chases after their car. Tom runs up and jumps into the open back, but before they get away, Hulk tosses a bench at them, and it smashes against their car, easily breaking. As they drive away, Hulk roars at them angrily.

Hulk walks through the park aimlessly, and he finds the dog, which begins to stir. He picks it up, and sits down with it, beginning o change back to David. The woman, who has been hiding in a nearby alley witnessing the scene, emerges and walks back towards the park. back to normal, David grabs a china of clothes, presumably from one of the nearby stores, and changes out of his ripped, mangled pants. The woman finds him, and they get in her car and drive out to the lab. On their way, they and the looters' car, which is crashed into a tree, and Rita and Mark are unconscious in the front. Tom, is laying a few feet away, barely conscious. Seeing that the e coli took effect on them, they put Tom in the back of their car, having the other two, who are beyond help. They drive out to the lab, and once inside, find the infirmary. David is only all to find the antibiotic that slows the e coli's effects, and he administers it to the woman, Tom, Buddy, and himself. She introduces herself as Patty Knowlton, and David introduces himself as well. She finds a drill, and goes to Cunningham's office, and she begins drilling into his safe, attempting to retrieve the file.

Meanwhile, Cunningham, along with two henchmen, Jordan and Sperling, drive into the town in a van, wearing hazmat suits. They begin loading any dead animas they can find into bags in their truck, eliminating any evidence that the chemical that was leaked is deadly. Before leaving they drive to the lab, and on their way, they find Rita and Mark, who they load into the back of their truck as well. Meanwhile, David gives Patty a break, and he finishes the drilling, and gets the file. They leave the office, only to run into Cunningham and his men. Cunningham chases Patty down, while Jordan and Sperling lock David and Tom in a supply closet. Cunningham chases Patty all over the lab, and he finally catches her and brings her back to his men. They take the file from her, but inside the closet, David's anger triggers his transformation. Everyone in the hallway outside turn to see the Hulk's fist explode through the door. The hulk breaks down the door, which lands on Cunningham's men. Hulk chases Cunningham through the halls, but before he can catch him, Cunningham gets in an elevator and closes the door. Hulk forces open the elevator doors, and grabs the top of the elevator, using every ounce of his strength to pull the elevator back up. Cunningham becomes concerned the the elevator doesn't go downwards as he programmed it too, and he is frightened when Hulk opens the doors. He picks Cunningham up by the sort, and walks out of the elevator, and throws him into a table. Hulk looks down and sees the file, which had been dropped, and he picks it up and studies it, puzzled.

Later, David and Patty drive away from the lab with Tom in the back and the file their hands, ready to deliver it to the proper authorities.

Retrieved from "https://marvel.fandom.com/wiki/The_Incredible_Hulk_(TV_series)_Season_5_7?oldid=5681075"
Community content is available under CC-BY-SA unless otherwise noted.