'The Marvel Collection' was the title given to several bound volumes containing presumably unsold copies of various Marvel UK weekly titles, which the company produced in the mid 1970s. At least three volumes of The Marvel Collection appeared, with 'The Third Marvel Collection' being produced in the sideways 'landscape format' then being used for two of Marvel UK's titles at the time, 'Super Spider-Man with the Super-Heroes Vol 1' and 'The Titans Vol 1'. The actual contents seem to have varied from copy to copy, presumably due to Marvel having uneven numbers of unsolds, making the Collections virtually impossible to catalogue. How many of each collection were produced is unknown, as is the identity of the cover artist(s). Characters featured included Spider-Man, Thor, Captain America, the Fantastic Four, the Avengers, and the Invaders. 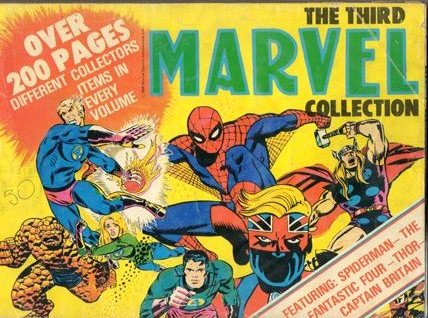 Retrieved from "https://marvel.fandom.com/wiki/The_Marvel_Collection?oldid=4950917"
Community content is available under CC-BY-SA unless otherwise noted.