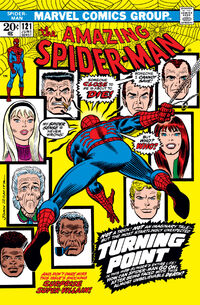 Origin
Prior to this arc, Norman Osborn had been the Green Goblin, but came down with amnesia, suspending his identity as the supervillain and most notably forgetting that Spider-Man and Peter Parker are the same person. Also, Harry Osborn, Peter's best friend and Norman's son, became addicted to drugs and was sent to a clinic for detoxification.

Peter, his girlfriend Gwen Stacy, and acquaintance Mary Jane Watson visit Harry, who is in a sorry state. His father Norman is livid about Harry's condition, blames Peter, Gwen, and Mary Jane for Harry's drug abuse, and throws them out. When Norman hears that he is facing financial ruin, he suffers a breakdown, and suddenly remembers everything. Norman again becomes the Green Goblin and makes it his goal to kill Peter/Spider-Man for all the misery he imagines Spider-Man has caused him and his family.

The Green Goblin abducts Gwen and lures Spider-Man to the George Washington Bridge. He gloats at Peter, holding an unconscious Gwen. The two fight, and just when Spider-Man seems to get hold of Gwen, Norman hurls her off the bridge. Spider-Man shoots a web strand at her legs, and catches her. As he pulls her up, he thinks he has saved her. However, he soon realizes she is already dead. Peter is unsure whether the whiplash from her sudden stop broke her neck or if Osborn had broken it previously, but he blames himself for her death regardless. The Green Goblin escapes, and Peter cries over Gwen's corpse and swears deadly revenge.

Spider-Man tracks Green Goblin down to a warehouse where an apoplectic Peter beats Norman to a pulp. But he cannot bring himself to kill him and freezes. Norman uses the opportunity to send his glider to impale Spider-Man from behind. Warned by his spider-sense, Peter jumps away just in time, and the glider instead impales the Green Goblin and seemingly kills him.

Peter goes home, feeling washed-out, hurt, and deeply empty. When he meets Mary Jane, her sympathy is lost on him. He only sees MJ as a carefree party girl; unable to feel his pain. But then, Mary Jane also cries, and for the first time, the two characters relate.

Retrieved from "https://marvel.fandom.com/wiki/The_Night_Gwen_Stacy_Died?oldid=5663689"
Community content is available under CC-BY-SA unless otherwise noted.